Automotive parts supplier, Brose, has announced it is using automated guided vehicles (AGVs) at one of its UK plants in Coventry to optimise logistics operations, achieve efficiency gains and win new business on future model launches. 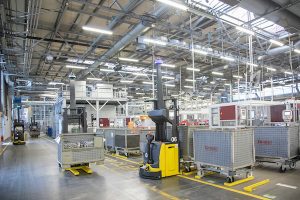 The company has invested around £2m ($2.6m) during the past two years on introducing AGVs to speed up movement of finished goods and eliminate human error.

“The factory in Colliery Lane in Coventry has fully embraced driverless vehicle technology, with AGVs expected to make more than 650,000 different journeys every year in seat production,” the German company said.

Steve Wilkins, managing director of Brose UK, recognised the demands in the automotive industry for an ever-more efficient delivery of parts to the production line, as well as the need for agility to react to fluctuating patterns of demand. He said logistics was crucial to the company being able to meet those demands.

Travelling at one metre per second, the AGVs will cover 67,000km per year. They are equipped with laser reflectors for navigation and are programmed by CAD-based routing software that finds available paths an indicates locations for pick up or delivery.

“Using the Brose Transport Guidance System, the AGVs are able to communicate with each other to ensure materials are moved smoothly through the warehouse, whether they are being stored for future use or sent directly to shipping lanes,” said the company in a statement.

At the same time, the AGVs can be programmed to work alongside human counterparts on the same production line, depending on where there is a need for capacity.