Workers at Mercedes-Benz Wörth plant in Germany, have dispatched the 750,000th complete-knock down (CKD) truck kit from the facility’s CKD Centre. 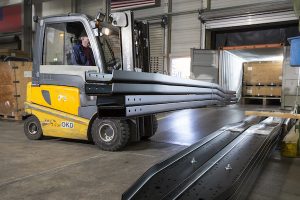 The white Actros 2652 LS was packed into a 40-foot container to be shipped to South Africa for assembly at the company’s factory in East London. It is expected to be delivered to its owner by mid-July.

The CKD Centre at Wörth began operations in 1966 and has since sent truck kits, which can consist of up to 2,500 individual components, to 60 countries. Up to 470 trucks customised to clients’ requirements now leave Wörth every day, according to the company.

“In order to keep operations, processes and handling as efficient as possible, sets of four identical trucks are usually packed together, which in most cases also fit into four overseas containers,” the company said,

Mercedes-Benz packs the kit parts into 48 packages per consignment made out of cardboard and wood, which the truckmaker said was reusable. It added that sending the trucks out as kits for local re-assembly in international markets, including South Africa, Russia, Saudi Arabia and Malaysia, significantly cut down costs because of the lower import duties on CKD shipments.

Forward-looking developments currently taking place at the Wörth CKD Centre include its IT infrastructure being updated with the latest digital technology so the kits can be controlled, picked, packed and scanned with the use of handheld devices, removing the use of paper documentation.