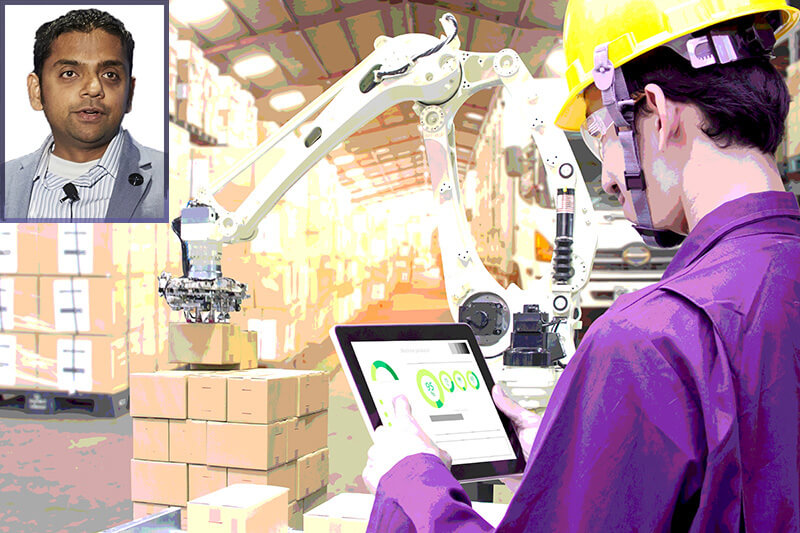 What is meant by this term ‘the autonomous supply chain’?The word autonomous has got very prevalent today in the industry. [To understand] the idea of the autonomous supply chain, you’ve got to go back to the history of how we went all the way from the industrial revolution to the digital revolution today. We were descriptive in nature, we were predictive in nature and we got prescriptive in nature; and now we are at the point, with all the scale and speed and advantage of machine learning and AI [artificial intelligence], that we don’t have to repeat what can be automated.

So that element of self-learning and continuously adopting that in your planning process or any actionable outcome is what we would call autonomous principles: automate, with elements of self-learning. If you just automate, it’s robotic process automation as we’ve seen with industry 4.0. Now, with a bit of self-learning, that turns into a cognitive platform, which is what I would call the next nirvana of autonomous supply chains.

How many automotive companies do you think understand this idea?I think the good news here is, the automotive industry – be it OEMs, tier suppliers or 3PLs – understands the need to get to this point. The fact that they’re understanding is good – it’s a starting point. But in terms of getting there, it’s a journey.

You have self-driving cars today. [The automated car] learns, it senses, and based on the senses there is a response – but the question is, how do you weed out the noise from all the data that it sends and take the right action? That’s the trick of the trade and that’s really where the autonomous elements come into play.

So the industry understands it but there are a lot more partners and collaboration that’s going to come into play to put this into practice and make it commercially viable, and make it savvy for end consumers. 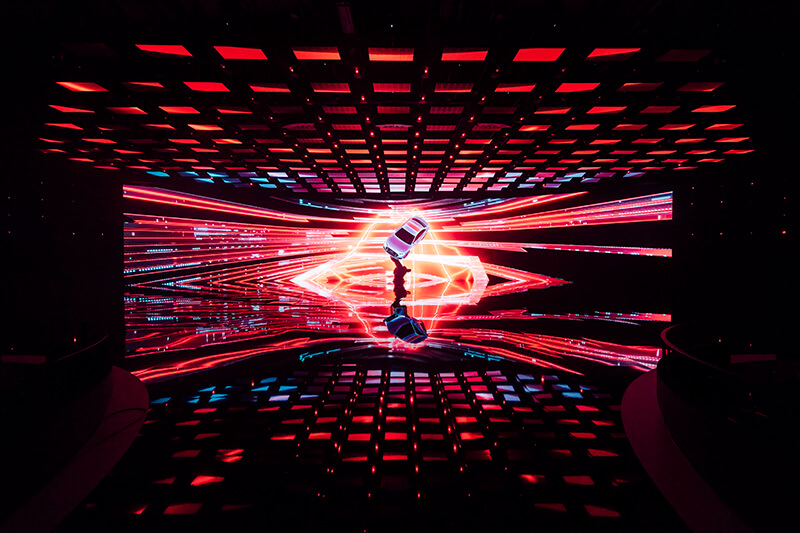 Autonomous concepts threaten to turn the automotive industry on its head

Do you have a timeframe for when this might happen, and will we see a lot of variation across companies? Will there be a point when an autonomous supply chain is as normal as a production line in a factory?It will indeed become the new normal. At a technology level, the autonomous supply chain is possible today and it is being adopted by various industry subverticals. But to take it to a larger perspective, [in terms of] the different use cases and when and where it will be applied, I easily see this as a three to five-year journey, because it is not just about robotics coming together, it’s not about factory 4.0 or industry 4.0 coming together. It’s also the consideration of which use cases will be ‘free for all’ and which have got to be regulated, which is equally important. So, with all these in play, the maturity would be in the next three to five years.

How do people factor into this? If we have an autonomous supply chain, what are the human employees doing?What will humans do if everything is taken over by artificial intelligence and machine learning? I see it this way: the future is not about fighting the machines. That [robotic automation] will continue to exist because it’s going to make lives better. Think of a world where people have to repeat the same task for the next 30 years on a daily basis. Those tasks can easily be automated – they have been automated. Now, we’ve reached a point where it’s not just robotic process automation; systems can also be taught to take a corrective action or detour, based on the environmental dynamics. That’s the machine learning part of it. Why have people do the stuff that machines can do better? That’s a given.

The question is, what will people do down the line when machines are taking over jobs? Fundamentally, people will become knowledge workers. The reason I say knowledge workers is, this dichotomy of life – where people think ‘I don’t have to learn when I work’ or ‘I don’t have to work when I learn’ – will soon be gone. And I also see this as a trend where people are focused on vision and creative engineering – I’m using the words ‘creative engineering’ because creativity, awareness, communication and vision are things that machines cannot bring to the table.

People also need to baby-sit these bots. There is work to be done: you’ve got to tell the machines what they need to do; somebody has got to write these playbooks. The difference here is, instead of being data analysts, people are now being empowered to make decisions for the company and also contribute to the industry in a very meaningful way. So there is power in your hands; there is an improved way of working thanks to the machines, but there comes a responsibility as well.

“The question is, what will people do down the line when machines are taking over jobs? Fundamentally, people will become knowledge workers.” - Srini Muthusrinivasan, JDA Software

It sounds as if there would be some job losses with the creation of this autonomous supply chain. There may be different types of jobs available, but would everybody be suitable for them?The trend is not disruptive. It is not happening overnight so that you wake up tomorrow morning and see thousands of jobs being lost one day and thousands of new jobs being created the next moment; this is a transition. There is a timeline, or a runway – especially for the current generation – to be prepared to run the course and take off.

But yes, indeed, there would be certain jobs that would be taken away and there are going to be tonnes of new jobs that are being added. And I would say the advantage is, this trend is augmenting people’s work lives, but it also warrants that people improve their skills sets. The skills sets will vary; when I say ‘knowledge worker’ it doesn’t [necessarily] mean writing a piece of software code. I want to re-emphasise the creative engineering part of it, which is what to do, when to do, how to do, and writing a playbook for these machines.

People have often been scared of change; in certain periods of history there were even protests against new inventions. Do you think society as a whole got over that difficulty or could the same thing happen again?I think there has always been resistance to changes if you go through the history of civilisations and it’s fundamentally due to insecurities – when there is a lack of skill sets, inertia and apprehensions. I think those [insecurities] will come and go, but in the longer run the autonomous paradigm will stay. It is accelerating faster than I had thought.

What do you think automotive companies need to do to prepare their workforces for the skills and jobs you are talking about?The first thing the automotive supply chains and leaders will have to do is bring in a fresh mindset. The automotive industry is 100 years old and one of the most complex industries that you can see – way too many trading partners, too-long lead times to procure, to manufacture, to assemble and to get [product] shipped.

[mpu_ad]There are elements of innovation that other industries have already adopted. Today we live in a world of ‘supply chain of one’, where every single finished car might end up being unique for any given consumer out there – that’s the thinking. From the distribution angle, people are going through the idea of node compression. What I mean is, why do you have to go through two tiers moving the inventory before it reaches the hands of the end consumer? The industry has already seen elements of direct-to-consumer approaches.

The culture of time compression means that people are spoiled by the expectation of a lead time of one to two days, which might become one to two hours [in future], when back in the day, a one month delay was alright when it came to fulfilling a given order. These are elements of what is happening on the downstream side.

On the supply side, factories need to be very agile. The usual metric is return on assets; I need to make sure my factory is 100% utilised to get my return on investment on the capital. But there are other metrics that people are looking at. How much personalisation do I need to invest in? Do I get profitable growth out of those kinds of innovations?

That brings in a mindset change. These kinds of mindset change are not new to other industries like consumer or high tech – they’ve done it, they’ve seen it over the past ten years. The question is, how do you take some of these leading practices and adapt? I’m not saying automotive ought to ‘lift and drop’, because that will never work; you’ve got to adapt it to this complex supply chain world because the implications are huge – you are looking at asset-intensive industries. There are long manufacturing lead times, long procurement lead times. Well, all of these can also change. One fine day, the manufacturing lead time and the uniqueness of manufacturing might be possible in a shorter span of time. Local sourcing might be a way for kanban-like fast movements of inventories, but it’s not a one-size fits-all. 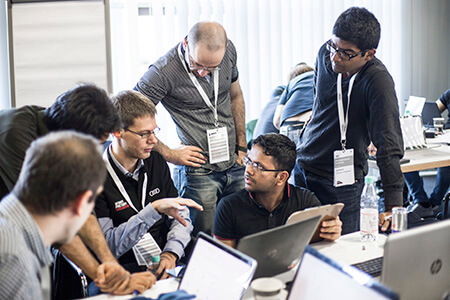 The bottom line here is: how do you create a value network that is agile? Because when things change, you’ve got to be able to react to it and be fungible enough to turn yourself into a fully functional, profitable industry.

How much can we learn from Amazon?Tonnes, for its disruptive nature. I like to use the term ‘point of leverage’, not the ‘point of sale’. When a transaction happens, people are excited about it. But today we live in an economy where if I have an asset, I want to maximise utilisation. There are consumers out there who, when they buy a car or truck, they think that asset in the yard or dock or backyard or parking lot is not making any money. The whole idea of ‘uberisation’ is to improve the utilisation of every single asset, in this case mobility assets on the streets.

So there are newer applications; the sharing economy is paving the way for different commercialised use cases that consumers can take advantage of and when [they do], naturally I think that will become the platform for industries to take this seriously and do something about it. That’s exactly why today you have OEMs looking at segmented markets – not just personal cars but fleets for 3PLs – and the autonomous nature of transportation as a service.

Amazon has also been investigating drone technology as a way of delivering its products. Do you see drones being applied across the automotive industry in future, as part of the autonomous supply chain?I have seen drones being applied within the four walls of warehouses – picking inventory, inventory counts and doing [work] that is in areas that are not easily reachable by humans. Drones are also being applied in areas where, geographically, it might be difficult for people to get access.

The way I see drones being leveraged in the automotive industry is transportation as a service. It’s an asset. I could move cargo; I could one day move people as well. Just like hailing a car, it could be a case of hailing a drone. Yes, there are some regulations that we have to go through, you’ve got to have the highway lanes approved, but in essence it is no different than a transportation asset and I do see the increase of drones [in future].

I think it’s already out there in the Middle Eastern countries today, it is available, so it’s only a matter of time before it will be available in European and American nations.

“Instead of being data analysts, people [will be] empowered to make decisions for the company and also contribute to the industry in a very meaningful way.” - Srini Muthusrinivasan, JDA Software