Mercedes-Benz Cars is planning to build a car plant in Egypt with an as-yet-unnamed local business partner. 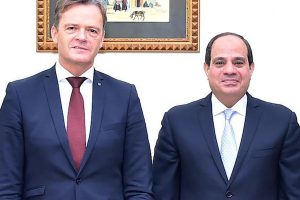 “Egypt is an attractive and competitive location for production and supporting logistics,” said Markus Schäfer, member of the divisional board of Mercedes-Benz Cars, production and supply chain “With the planned local assembly we are confident to be able to expand our market position.”

The assembly plant project is being developed in collaboration with the Egyptian government, said the German carmaker in a statement, and was advanced in recent discussions Schäfer had with Egyptian president Abdel Fattah El-Sisi in Cairo and prime minister Mostafa Kemal Madbouly in Berlin.

El-Sisi said: “We welcome the decision of Mercedes-Benz to resume manufacturing and assembly of cars in Egypt, a step that reflects the improvement of the investment environment and the performance of business in Egypt.”

The country is open to cooperate with the company to develop the automotive industry in its various categories, he added.

The president’s reference to resuming manufacturing is to the partnership Mercedes-Benz’s parent group Daimler, has with the National Automotive Company. Through the Egyptian German Automotive (EGA) joint venture, they produced vehicles via the complete knockdown (CKD) method from 2009 until May 2015.

The German OEM has also talked to the Egyptian government about state infrastructure projects, such as a new capital and planned smart cities. “Daimler has offered its expertise in modern mobility concepts, electro-mobility and electric cars as well as autonomous driving. Detailed agreements have not yet been concluded,” the group said.

Mercedes-Benz Egypt, a wholly owned subsidiary of Daimler, currently has its own import and sales organisation, a central spare parts warehouse, and authorised retailers and workshops in Cairo, Giza, Alexandria and Hurghada. The company’s operations account for more than 1,000 direct and indirect jobs in the country.