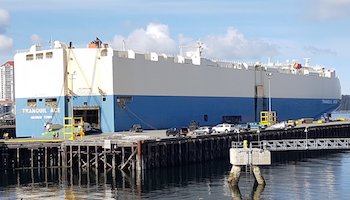 German OEM Mercedes-Benz is testing the logistics of a new vehicle processing centre (VPC) at the port of Nanaimo on Vancouver Island.

It has been set up as an alternative to the much-used nearby port of Vancouver, and Mercedes-Benz will utilise the VPC to serve the Canadian province of British Columbia with passenger cars and Sprinter vans, a company spokeswoman told Automotive Logistics.

Nanaimo port authority described arrival of the company’s first cars on the vehicle carrier Tranquil Ace as a test run for the 5,574 sq.m centre. It was established by Western Stevedoring and terminal operator SSA Marine’s auto division to carry out final detailing on European cars before delivery to British Columbia dealerships.

The authority’s CEO Ian Marr said the VPC opens new doors of opportunity for the Nanaimo region. Traditionally, European cars are shipped to eastern Canada and sent across the country by rail.

“As the first auto carrier enters the Port of Nanaimo, we recognise that this is a historic event for our community,” says Marr. “This was a test of our protocols that will maintain the highest levels of safety for workers and the public.”

The federal government gave financial support to the VPC, which will create around 100 jobs in early April following arrival of a full shipment of vehicles, said the port authority.