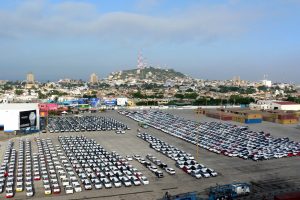 Mexico's ports saw a 42% increase in finished vehicle traffic in the first five months of this year, figures from the country's Transport & Communications Ministry (SCT) have shown.

Ports in the Gulf of Mexico (Veracruz, Altamira and Tuxpan) were the main ones to benefit from the upswing, showed the SCT statistics. These accounted for 466,732 units, up 48% on the 315,632 units handled in the first five months of last year.

Altamira had already seen a huge spike last year because of Kia export volumes, shipped via the port from its new plant in Monterrey.

There was also significant growth at Pacific Coast ports (Mazatlán, Manzanillo, Lázaro Cárdenas and Acapulco), however, which reported a year-on-year increase of 30% from 154,718 units to 201,149 units.

Lázaro Cárdenas is expected to grow following last year’s contract for SSA Mexico to operate a car terminal there. The company is investing $56m as part of a first phase of development that will see construction of an initial 80,000 sq.m site handling up to 400,000 units annually. SSA Mexico, which has operations at four Mexican ports, expects to handle about 922,500 vehicles at the country’s ports this year, a 50% rise.

Mexico is widening its trade beyond the Nafta region and dealing with more foreign OEMs outside of the US, including in Asia, from which it is getting a growing number of imports.

Shipping within North America from Mexico has been on the increase, especially for some US east coast ports, but has remained a second option to the well integrated rail links north because of inconvenient shipping and lead times from Mexico to the US. Congestion and poor productivity in many Mexican ports has been a problem. According to the SCT, Mexico produces 3.4m finished vehicles a year, of which 2.8m (82%) are exported; 90% of all exports to the US last year went by rail.

However, as seen from the investments in Lázaro Cárdenas, Mexico’s port network is gaining more attention and the increase in exports bucks the decline recorded last year.