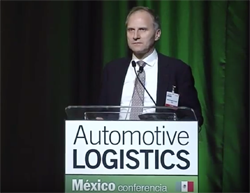 BMW has mapped out its logistics plans so far for its upcoming plant in San Luis Potosi, in central Mexico, revealing a global supply chain, streamlined internal logistics and ambitions for a highly diverse outbound distribution. The plant is scheduled to come online in 2019 with an initial capacity for 150,000 units per year following an investment of around $1 billion.

“The San Luis Potosi plant will be the most innovative and sustainable, most efficient, and most competitive car plant within the BMW Group,” said Karl-Friedrich Koch (pictured), vice-president of production control and logistic for the plant, speaking at the 2016 Automotive Logistics Mexico conference. It is an ambition that he is also extending to the carmaker’s supply chain and logistics, with several new concepts and designs anticipated.

So far, BMW has moved 3.5m cubic metres of sand and stone, with a view to commencing construction in San Luis Potosi in June 2016. Plans for assembly and logistics structures are already in place. For example, the plant will focus on straight value streams to allow for lean inventory and for trucks to act as “warehouses on wheels”, according to Koch; parts supply and logistics will move in a straight line through to assembly and finishing, while body-in-white and paint processes will flow from another straight line to the assembly. There will also be a clear separation of traffic flows between employees, parts material, and finished vehicles. Outbound finished vehicles will be transported via a dedicated railway at the plant. To facilitate future growth, BMW is also factoring in well-defined expansion areas.

Koch also revealed that BMW is planning to outsource more material handling and logistics at the plant to logistics providers than it typically does in Germany. “We are thinking of a new plan for in-plant logistics. In Germany we usually do that with our own staff, while in Mexico we are looking to give quite a bit more to logistics service providers,” he said.

Audi, by contrast, has revealed that it will leave most in-plant logistics with its internal staff for its new plant in San José Chiapa.

While the plant will be designed for optimal handling, one of the most challenging and complex aspects will be its inbound supply chain. Part of that complexity will come from applying BMW’s build-to-order processes and parts variety across long-distance supply chains with long lead times amidst a production environment subject to many changes.

For example, there are apparently 38 x 1033 possible variants of the 3-series alone. Plus, as BMW tries to maintain flexibility within the supply chain, customers can modify their orders up to six days prior to start of assembly. “We aim to have to have all parts in sequence and in perfect quality,” Koch said.

While 67% of parts by weight in cubic metres will come from Mexico, Koch expects around 15% of the material to come from Europe. There will also be a share of parts moving from suppliers further away in the US and Canada. “We have to keep track of all tier suppliers with regard to quality and delivery assurance,” he said. “We’re not quite happy with the level of volumes that will come over from Europe, and we want to reduce that. With more OEMs there will be more Mexican suppliers, there will be more chance to source here.”

For outbound logistics, BMW expects that the majority of units produced in San Luis Potosi will remain in North America – around 61% for the US, 3% to Mexico and 1% to Canada. However, about one-third will go beyond the continent, including 21% to Europe (including 7% to Germany), and the rest to global locations including South America, Asia and Australia. This ratio of exports beyond North America is higher than the current average in Mexico – which is fewer than 20% of exports – though Audi, which plans to exports around 60% of production beyond North America.

For moving vehicles to the US, the distribution between rail and sea transport hasn’t yet been determined, but Koch said BMW would likely use a mix of modes and locations, including rail for central US markets and Canada, as well seeking options for shipping to both the east coast and the west coast. But he also expressed some concern about logistics and infrastructure capacity issues as Mexican production is expected to grow by a further 60% between 2015 and 2020.

“We are looking at alternatives, costs, but also potential capacity issues here as the volume is growing so much,” he said.

Overall, Koch emphasises that the complexity of parts and markets for BMW’s Mexico plant will require stability and robustness in processes. “We have to have the people and the service partners to maintain this process excellence,” he says.

A video recording of Karl-Friedrich Koch’s presentation, along with the rest of the conference, is available here.