Mexico conference: Supply base set to grow and deepen 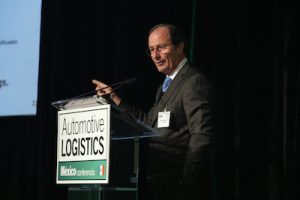 The automotive supply base in Mexico looks set to enjoy further growth and localisation as carmakers and tier suppliers increase production and sourcing in the country to take advantage of favourable labour costs, falling energy prices, as well as lower logistics and distribution costs for key markets in North America, and beyond.

At the Automotive Logistics Mexico Conference in Mexico City, Gabriel Lopez (pictured, left), the president and chief executive officer of Ford Mexico, pointed to the country’s increasing competitiveness for light vehicle production and its supply chain, both within North America, as well as against global competitors in Europe, South America and Asia. Light vehicle output has grown 64% since 2006 in the country to 3.22m, a growth surpassed only by China and India in the period. Volumes are expected to rise another 50% by 2020 to around 4.9m units, with only India and Thailand rising at a faster rate, according to IHS forecasts.

“This growth is thanks to a number of factors including moderate wage growth, sustained productivity and foreign-exchange rates,” said Lopez. “It is also thanks to a big investment in infrastructure to keep Mexico’s global competitiveness.”

According to Mike Silvio, senior director of supply chain management at tier supplier Cooper standard, the price savings on parts that many manufacturers sought in Asia and other low cost countries over the last decade or more have been eroded by higher labour and logistics costs, making Mexico a more attractive source for parts across North America.

“The perception of risk is also different today than it had been,” he said. “We are now managing our supply chain more by the balance sheet, which means more consideration for inventory and logistics costs.”

The growth is evident across the supply chain. Ford’s Lopez pointed to growth of 45% among tier suppliers producing in Mexico since 2006, with parts supplier revenue reaching $79 billion in 2014. He expects the industry to expand to $85 billion in 2015 and $90 billion by 2017, citing figures from Global Insight.

At Ford, while Mexico is the company’s fourth largest country for vehicle and engine production, it is its second largest parts purchasing country globally. Of the $84.2 billion that Ford spent on parts purchases in 2013, nearly 14% of them were in Mexico, after the US (31.8%) and ahead of China (10.6%) and Germany (6.7%), said Lopez.

The reason for this volume is Mexico’s role in both local and regional supply chains. According to Rafael Lopez, director of material planning and logistics at Ford Mexico, around 55-60% of the carmaker’s production parts for Mexico are sourced in the country. But the growth of the supply base is presenting opportunities not only for more local supply base, but also for exports to the US and other markets, including South America, Asia and Europe.

“It is important that our supplier base is exporting parts to the US, with Mexican parts sourcing growing every year,” he said. 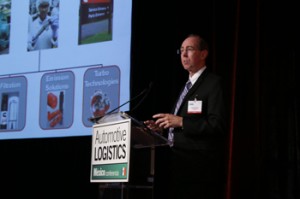 General Motors also uses Mexico as an important base for regional parts supply. According to Luis Sandoval, logistics manager at GM Mexico, 44% of the carmaker’s Mexican-sourced parts stay in Mexico, while 43% go to the US, with a further 9% to plants in Canada; a small share moves to South Korea, Brazil and elsewhere.

Tier suppliers are also investing in Mexico production bases, or deepening their supply operations in the country.

Engine and fuel systems supplier Cummins, for example, is moving towards higher localisation of suppliers in Mexico, along with consolidating its supply chain and distribution network through a network of crossdocks, according to Robert Ryan (pictured, right), supply chain director for Mexico and Central America. Across all Cummins divisions in Mexico, localisation is set to grow from 19% in 2013 and to 27% this year, with plans to reach 50% by 2018.

“This will help us to have a more agile supply network with a higher turn rate,” said Roberts.

In the state of Guanajuato, which is home to Honda, Mazda, GM and Volkswagen assembly and powertrain plants, there have been $4.85 billion in automotive investment, including a large amount of American, German and Japanese tier suppliers, according to the state’ governor, Miguel Marquez.

The state has also seen investment in the tyre sector, with a new plant by tyremaker Pirelli in Silao, which started production in Silao in 2012. According to John Godfrey, director of logistics and purchasing at Pirelli Tire North America, the plant will have capacity for 3.3m tyres this year, and reach full capacity of 5.5m in 2017. The plant has increased Pirelli’s local supply of tyres in North America from just 5% to 30%, which will increase to around 50% as the Mexican plant reaches capacity.

“The growth in regional production has allowed us to make more direct shipments both for OEM and replacement tyre customers,” he said. “Our fill rate has increased from 60% to 90%.”

Some economists expect that Mexico’s burgeoning energy sector, which is being opened up and liberalised under the current government, could yield future benefits to sectors like automotive.

Ildefonso Guajardo, the Secretary of the Economy for Mexico, highlighted both the energy reforms and the North American shale gas revolution as turning points for competitiveness across the supply chain. “We have an energy bonus in North America, and prices are now set to be a third or even one-fifth those of Asia or Europe,” he said.

He also suggested that the country could become more competitive in petrochemicals, including plastic and textile automotive parts. “With the price of gas and the liberalisation of energy, we are becoming more competitive in areas of plastics, which is important to auto parts as well as to textiles in the interior of cars,” he said.