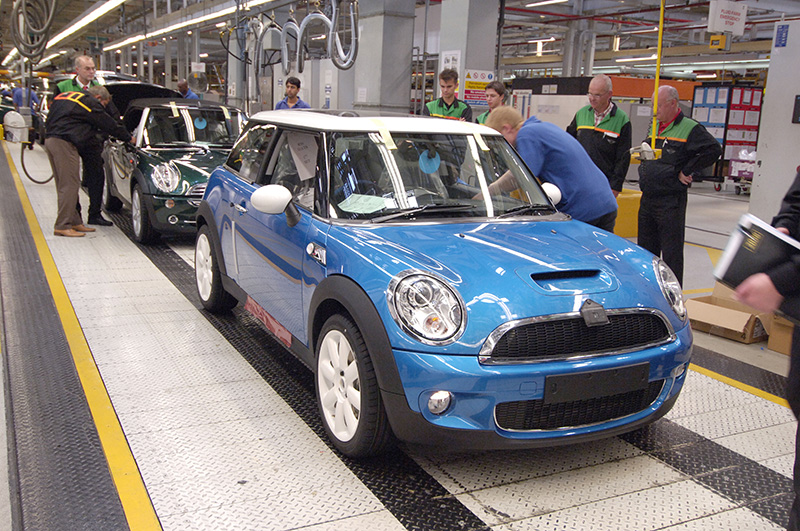 BMW’s Mini factory in Cowley, near Oxford in southern England, is a striking example of managing high levels of supply chain and production complexity, set against space constraints and long lead times for inbound parts delivery and exports of vehicles.

However, thanks to well-defined supply and logistics processes, along with strong IT systems, the plant continues to meet a high level of productivity and quality. Even more variety is set to come to the Oxford plant as it prepares to build a new electric model – and as the carmaker and the rest of the UK industry grapple with the potential barriers that may follow Brexit.

Markus Meiler, general manager of logistics planning for BMW in the UK, told delegates during a plant visit as part of this year’s Automotive Logistics UK summit that the factory, situated close to the city of Oxford and buttressing a major motorway, is difficult to expand, with logistics space at the plant especially hard to come by. Nevertheless, the plant has 65,000 sq.m of logistics area on site, which helps support deliveries from 500 suppliers, delivering 12,000 different part numbers.

Currently the plant builds around 1,000 vehicles per day across three-door, five-door and Mini Clubman models. Of more than 210,000 vehicles built at the plant last year, 80% were exported.

Going the distance in the supply chainProduction at Oxford is notable for a number of reasons. A large share of the vehicles built at the plant are customer orders, with high levels of options and customisation. Mini follows BMW’s global production system, which fixes the production sequence six days before assembly but allows customers to make changes and choose options up to that point, thus demanding a considerable amount of flexibility in material flow, IT systems and assembly.

Mini’s inbound supply chain is also notable for its distances and international make-up. The Oxford plant does not have a press shop on site, for example, with body parts coming mostly from the carmaker’s press shop in Swindon, about 50km (30 miles) from the assembly facility. Some body parts also come from Germany, however. 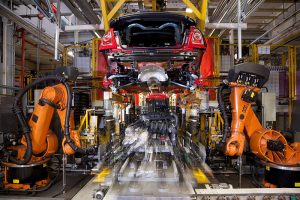 Petrol engines are sourced from BMW’s engine factory in Hams Hall, in the Midlands; diesel engines are imported from Steyr, Austria

While BMW has a range of just-in-sequence and just-in-time suppliers in the UK, it imports many parts from abroad, mainly from Germany and central Europe, with several truckloads per day also coming from other continents including North America and Asia.

Engine supply is also divided between relatively local and distant supply, with petrol engines, which currently go into around 60% of vehicles built in Oxford, coming from BMW’s engine factory in Hams Hall, in the Midlands, and the remaining diesel engines imported from Steyr, Austria. According to Meiler, the average part for a Mini built in Oxford travels 660km.

Around 270 trucks arrive at the Mini plant each day, including from ports. About 95% of material coming from Europe is shipped via the port of Calais, in France.

The outbound chain is also spread across large distances. While the UK is currently the biggest market for Mini, its largest export markets are the US, followed by Germany and China, with a high share also moving to other European countries. Mini models are also assembled at the Nedcar contract manufacturing plant in Born, the Netherlands.

To manage this supply chain volume and geography, the Oxford plant uses a number of standard delivery and supply processes. Across the inbound supply chain, three different network procedures are used, according to Meiler. The JIS/JIT process, for example, includes full truckloads delivering in high frequency from supplier locations, some of them close to the plant and in the UK, but also several part groupings delivered in sequence from as far away as Romania.

Another procedure, according to Meiler, is BMW’s steered network, which includes material delivered in high volume with low fluctuations, actively directed by the carmaker typically in full truckloads direct from suppliers or via milkruns.

Finally, the base network is for consolidation of parts, and includes low-volume, highly volatile supply that is steered and combined by hauliers via crossdocks or consolidation centres.

Counting the ways to handleFor the plant, which has 44 loading docks, there are five essential standard processes for handling material, following BMW global standards.

The first process is by onsite warehouse. Of the 12,000 part numbers delivered to the plant, 2,772 are warehouse parts, which are delivered in bulk in unmixed load containers – meaning each box has the same part number or family – to the onsite warehouse. Parts are supplied directly to the assembly line from the warehouse, with only a small amount sequenced for line feeding. Suppliers receive detailed call-offs four weeks prior to delivery, with updated 12-month forecasts for each part.

A second process is direct delivery to assembly – also known as ‘DIMO’ – with parts delivered again in unmixed container loads to a buffer zone close to the assembly area, often once a day or once every several days. The parts are booked directly into the assembly inventory system, with most warehousing and handling eliminated. Suppliers also receive a rolling prognosis for DIMO parts and detailed call-offs four weeks before delivery.

The third process is just-in-time delivery, in which unmixed loads are also delivered to a buffer zone close to assembly, but without any inventory booking. In this process, the required parts are shipped for actual vehicle orders rather than forecasts and are called off four and a half days prior to assembly – which is the point at which vehicle schedules are set, known as ‘status 50’. Using a system called SPAB for synchronised calls, the call-off is for targeted delivery times. The order window here is shorter and therefore typically much more accurate. According to Meiler, Mini uses seven JIT part families for Oxford, all of them based in the UK.

The two other processes are different types of just-in-sequence delivery, known as JIS50 and JIS53. These methods deliver parts in the precise production sequence in the container to a buffer zone close to assembly. For JIS50, which refers to status 50, just as for JIT parts the call-off is submitted to suppliers four and a half days before assembly via SPAB with a target delivery date. However, between ‘status 50’ and actual assembly, there can still be further adjustments to the final production sequence. A vehicle may be delayed because of a missing part or capacity constraint, for example. To manage these changes, a cumulative backlog is created, and parts for delayed vehicles are taken out of sequence and stored in buffer zones until assembly. 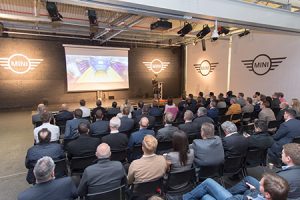 According to Meiler, for Oxford BMW uses JIS50 for 17 part families, 15 of which are in the UK, and five of which are in the rest of the EU (some part families are supplied by two suppliers). Parts outside of the UK delivered in sequence include main harnesses from Romania, cooling modules from Poland, diesel engines from Austria and fuel tanks and centre consoles from Germany.

Suppliers delivering according to JIS53 receive call-offs only a few hours before assembly – at ‘status 53’ – at which point there is no cumulative backlog and no further changes to the production sequence. These parts would typically be in very close proximity to the plant to ensure delivery in a short period. Mini Oxford has three part families using this method, including exhausts and headliners from Oxford, and front ends from Banbury, about 50km away.

In total, Meiler said, Oxford receives around 10 JIS or JIT deliveries per hour, which make up around 2,800 pallets per day (out of a total of 5,500 pallets of parts per day). Around 160,000 parts are sequenced daily.

For outbound logistics, the Mini plant benefits from good rail links, with about 70% of daily output – or 700 vehicles – leaving the plant aboard two daily train services, including to the port of Southampton for export. A further 18 vehicle transporters per day supplement rail for exports moving to Southampton and the port of Immingham. About 50 vehicle transporters leave the plant each day for domestic distribution across the UK.

The Mini supply chain represents a carefully crafted flow that depends on delivery accuracy and smooth shipments across the UK, and notably between the UK and EU because of the high amount of European content in the vehicles. This connection across Europe is set to continue and strengthen. Earlier this year, BMW announced that Oxford would build an ell-electric three-door Mini starting in 2019. However, the electric drivetrain parts will be built at BMW sites in Dingolfing and Landshut, Germany.

This supply chain setup could face extra costs and delays once the UK leaves the European Union, including the single market and customs union that ensure zero tariffs and no customs clearance requirements. Delays at Channel crossings and rules-of-origin requirements, for example, would present a significant challenge for Mini in the UK.

Steve Wrelton, external communications manager for the Oxford plant, said the company hoped to see no change to current trading, tariff and customs arrangements as the UK government negotiates Brexit.

To view videos of the main sessions at the conference, click here.