Moving into an up-and-coming neighbourhood 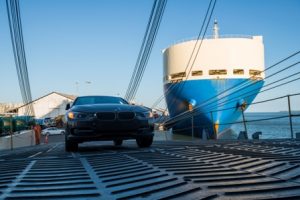 While comparisons have been made between Australia and South Africa’s automotive industry, and concerns are growing, experts in the country believe the country has to take advantage of logistics and proximity to potential markets such as Nigeria.

South Africa’s automotive industry could share a similar fate to Australia, where OEMs are planning to completely end production, if the market fails to address issues including logistics disadvantages, supply chain localisation, and high costs. Although in close proximity to fast-growing African markets, South Africa is struggling.

As things currently stand, there is no real reason for outside investors to manufacture in South Africa, according to van Zyl. Its labour costs are the highest of the ‘BRICS’ nations (Brazil, Russia, India, China and South Africa) and there has been a significant amount of industrial action among vehicle assembly workers and supplier production. Furthermore, upstarts such as Mexico and Thailand are more cheaper for labour and logistics.

South Africa’s location doesn’t help either. The country is geographically distant from the US, Europe and emerging Asian markets, which means both disparate imported component supply, and longer lead times for finished vehicles. “Logistics is an area where we really struggle to compete,” van Zyl added.

As a result of sluggish economic growth in 2014, vehicle sales are set to decline by around 4.5% this year, according to Naamsa. Although vehicle sales have grown over the past four years, and production is recovering from the declines in earlier quarters during the strikes, overall output and exports have also fallen. In the first nine months of the year, exports to the rest of Africa were down 23% to 46,016 units; to North America were down 24% to 39,052; and to Asia were down by 12% to 21,740. Exports to Europe, the largest destination, were up 21% to 70,832 vehicles. October, however, did show signs of strength, with a 33% rise in overall exports.

South Africa’s ‘new auto industry’ is coming up on the 20th anniversary mark, as it was in 1995 that the government launched the Motor Industry Development Programme to stimulate local production. The industry rapidly integrated into global value chains operated by multinational corporations; once their dominance was established, local firms suffered a rapid death. 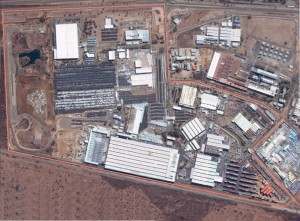 Today, the international producers who grew their production in South Africa are now facing cheaper competition elsewhere. Indeed, many feel uncomfortable at the similarities between Australia and South Africa in some regards, from their remoteness to export markets to their  mineral-dependent economies. Professor Goran Roos, automotive sector advisor to the Australian government, explained that it costs around A$3,000 ($2,650) more to manufacture a car in Australia than in Thailand. While South Africa may not have to worry about a China or Thailand on the doorstep, “[South Africa has] Nigeria, a country that will work very hard to attract manufacturers to its shores,” Roos said.

South Africa has other issues too, including a relatively small domestic market and sky-high management costs, which are driven by inadequate state provision for schooling, medical care and security. “So essentially even if we have managers who are 100% South African, we effectively have to compensate them like expatriates,” said Professor Justin Barnes, the director of Benchmarking and Manufacturing Analysts.

Barnes said although its future outlook was guarded, South Africa’s situation was not as bleak as that of Australia. “We are in a much better situation than the Australians,” Barnes said. “They have no place left for the automotive industry, but we certainly do.”

"We have all the raw materials we need here. Unfortunately, it’s much easier to dig it out of the ground and ship it away than it is to process it here. "
- Johann van Zyl, Toyota South Africa

For example, South Africa could have an advantage in its location as a base to sell into sub-Saharan Africa, something Australia had very little hope of ever doing in the Asia Pacific region. “We are in a very, very good neighbourhood,” Barnes said.

Although the US and Europe may be far away, South Africa is almost next door to around one billion people, and if this can be properly exploited, it will offer a compelling advantage. However, to move ahead and overcome the logistical challenge of being far from its current main markets, van Zyl suggested that the country needs to turn to its true advantage: its mineral wealth. South Africa has large iron ore resources and the world’s largest body of platinum.

“We have all the raw materials we need here,” said van Zyl. “Unfortunately, it’s much easier to dig it out of the ground and ship it away than it is to process it here. We need to be doing more to ‘beneficiate’ [process or treat] local minerals to the benefit of our industries.”

In raising this point, van Zyl touched on a longstanding and hard-fought issue between the mining industry and pretty much everyone else: that local users should have to pay the same price as their competitors overseas for raw materials procured within South Africa.

The practice, known as ‘import price parity’, essentially means that the price for products sold locally is benchmarked against international prices for the same product. The lowest available free-on-board price is then used, adding shipping costs, commission, stevedoring, harbour costs and import tariffs.

Local manufacturers are also obliged to pay in hard currencies such as the dollar when their cost base is in rand. In times of declining currency value that the country is currently undergoing, this pushes up costs without added benefit.

“The value of components lives in labour and materials. We should be doing more to ensure we have an advantage using locally procured materials. Beneficiation is our biggest opportunity,” van Zyl added.

The emerging success story of Nigeria’s automotive industry paints a happier picture than the one in South Africa. The country has recently introduced an automotive policy that will see hiked tariffs on imported used vehicles and encourage semi-and-complete knockdown kit assembly (read more on Nigeria here).

While the country’s industrial growth could threaten South Africa, many industry experts rather see Nigeria’s economic potential as an opportunity for South Africa. Although it is early days, Nigeria could become the template for further Africa expansion, noted Mike Whitfield, CEO of Nissan South Africa, which has set up the first OEM-run assembly plant in the country in several decades. 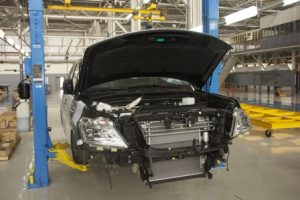 “Africa is the last investment frontier; it has double the population of Europe and will have a GDP of $1.5 trillion by 2016,” Whitfield said.

In spite of a fast growing middle class, car ownership in Africa is still low and people generally depend on public transport, which provides poor service. Private vehicles would find ready acceptance if they were available.

An encouraging development is the growing taste for smaller D-segment vehicles. “Drive through Luanda [the capital of Angola] and you don’t just see SUVs as you did five years ago. It’s small entry level cars,” he said.

He also noted that it was the latest models across the range that would be needed to win market share. “Don’t believe you can go into Africa and not offer the latest product you have.”

To build its African presence, Nissan is no longer relying on third party distributors and is instead setting up its own distributorships.

Whitfield and Barnes noted that parallel imports, particularly of used vehicles, remain a problem in potential markets across Africa. A rising middle class notwithstanding, African west coast countries tend to buy cheap, imported used vehicles from Europe, and from Japan for those on the eastern seaboard. “If countries keep encouraging the importation of used cars, we will still be talking about Africa’s potential over the next 20 years,” said Barnes.

However, Whitfield suggested that OEMs would be able to compete with used cars as economies grew in Africa. “With better roads and better economies, I believe Africa is the place to be,” he said.

"With better road and better economies, I believe Africa is the place to be" - Mike Whitfield, Nissan South Africa

In some respects, the South African Automotive Week was Nigeria’s moment. The country recently overtook South Africa as the continent’s biggest economy, and has begun to attract automotive assemblers after an absence of nearly 20 years.

“We have the potential to support a local manufacturing industry and eventually to export as well,” Aminu Jalal, the director general of the National Automotive Council of Nigeria said. “There are currently a lot of investments going on in this sector, being anchored by the South African motor industry.”

He noted that imports of vehicles now run at around $3.5 billion a year, a figure that will gradually come down as local assemblers diversify to indigenous operations. Initially most vehicle parts will be imported, with Nigeria basically focusing on assembly. Over time, however, specific parts will be manufactured locally as Nigerian suppliers develop key competencies, he said.

“We spend $1 billion a year on imported tyres alone after our two plants closed down. This is just one avenue of localisation opportunity that is waiting to be developed,” Jalal added.

Countries like Nigeria may help South Africa avoid a similar fate to Australia. Although early days, logistics providers and supplier are also starting to follow OEMs to these areas. David Macrae, business development manager at Wallenius Wilhelmsen Logistics, says his company is looking to new markets across the continent. “Africa is a hot topic right now. It is huge – and there are a lot of challenges. But we are on the lookout for opportunities.”