Moving towards integration in Southeast Asia 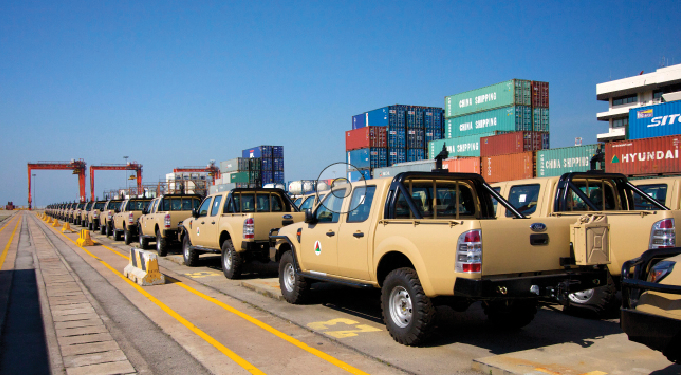 Potential customs harmonisation among the ten ASEAN nations could see Thailand at the centre of a global automotive powerhouse, with big implications for logistics

Thailand continues to hold much promise for the automotive industry. Home to many of the world’s largest carmakers and tier suppliers, it should also receive a boost from upcoming changes involving the ASEAN Economic Community (AEC), which will eventually harmonise customs and remove duties among the ten-nation bloc. The country could sit at the centre of a global powerhouse, serving the fast growing Indonesian market with parts and vehicles as well as increasing its competitiveness globally. Rumour has it, for example, that Ford will shift production of the Fiesta from Mexico to Thailand in 2016.

In the meantime, Thailand has been taking some hard knocks. Political turmoil in the country – including the imposition of martial law since May – has dented vehicle sales, while production has also been tumbling from its recent high of 2.5m units last year. The country’s ‘First Car Buyer’ programme, which ran in 2012 and 2013, has also pulled forward demand and left something of a hangover.

Logistics are competitive in the country. A well-developed supply base allows for a sophisticated network of milkruns and just-in-time deliveries. However, traffic congestion and labour shortages have led to issues, while border crossing between Thailand and its neighbours is far from smooth. Manufacturers and logistics providers are hoping that the AEC measures will be implemented quickly and smoothly.

Thailand is home to three automotive clusters. Rayong Province on the eastern seaboard, about 170km southeast of Bangkok, hosts General Motors, Ford, Mazda, BMW and Suzuki. A second cluster is Ayutthaya Province, just north of Bangkok where Honda has a factory. Next year, Honda plans to open a second plant in Prachen Buri Province, 150km east of Bangkok (although the carmaker has said it would delay its construction). The third cluster is Samut Prakran Province, south of Bangkok, where there is Toyota, Isuzu, Nissan, Tata Motors and Daimler.

"With the AEC, we wish to see a reduction in cross-border formalities in the region. For example, it would be great to be able to use one Thai trailer in all neighbouring countries and vice-versa" - Raphael Thalinger, RMA GroupOverall, Thailand’s supplier base and reasonable road infrastructure allow manufacturers to run efficient logistics networks. Visteon Thailand, in Rayong, near the port of Laem Chabang, sources most of its supplies from Thailand and moves about 50% of its local components by milkruns, according to managing director Ramesh Ramanathan. Visteon has standardised more of its packaging and developed an ordering system that enables suppliers to view its daily demand and track deliveries, as well as a barcode system to improve downstream processing. Ramanathan says these changes, along with the milkruns, have reduced workloads at Visteon’s receiving dock, helped simplify packaging requirements, and created more controllable and predictable cost fluctuations.

There is strong localisation in Thailand. As the world’s largest exporter of one-tonne pickup trucks, for example, 90% of the inbound parts for this segment are sourced locally, according to Rarm Virutamasen, senior manager of automotive operations at APL Logistics. However, the supply chain also depends on many global parts. Visteon receives about 20% of its parts by value from China and Korea. Small components ship by air freight. “We are experiencing strong growth in packaging components into CKD [complete knockdown] kits, which we normally ship to our customers in Thailand,” says Ramanathan.

Bosch Automotive Thailand’s supply chain, on the other hand, has strong links to Asia, especially Japan. The company, which has three plants in Rayong, serves the Japanese market primarily, while around 60% of its inbound components come from there, according to head of logistics Boripat Kuntom. The tier supplier plans to increase sourcing in Thailand, he says. Currently its parts move to a single warehouse, where Bosch sequences about 95% of the total.

To import parts, Visteon uses the port of Klong Toey – which is part of Bangkok – and Laem Chabang, 115km southeast of Bangkok. Most of Bosch’s imports go through Laem Chabang, Thailand’s most widely used automotive port. Kuntom says that inland transport is Bosch’s main concern at the port because of heavy traffic.

The Volvo Group also imports a large amount of material, although it is working to increase localisation for its truck production. Wang Ying, director, logistics purchasing APAC at Volvo Group Logistics Services says it uses the port of Laem Chabang to import CKD and production parts. “Currently, we are looking at optimising our logistics network for both production parts and aftermarket parts in Thailand and the ASEAN region in order to reduce costs, lead time, and achieve optimal modal distribution,” says Wang.

The road to AEC...and the roads it will build

Perhaps the greatest harbinger of change for both the supply base and logistics in Thailand and Southeast Asia is the AEC agreement, which is on schedule for implementation in late 2015. AEC’s goal is regional economic integration, including the elimination or reduction of logistics barriers both physical and bureaucratic. Bosch’s Kuntom points out that tariff rates and custom practices currently differ throughout ASEAN and they need to be harmonised. For example, Thailand, Singapore, Malaysia and the Philippines use e-customs, and Cambodia implemented it at the end of May, but the other ASEAN members do not. “E-customs needs some time to develop. Until then, there will be bottlenecks for a couple of years,” says Kuntom.

Ramanathan says Visteon is interested in seeing the impact on labour rates once the AEC agreement is in place. Kotaro Seki, president of NYK RoRo Logistics, hopes that more free movement of labour will be of benefit since the company struggles with a shortage of trained and experienced drivers and other staff. 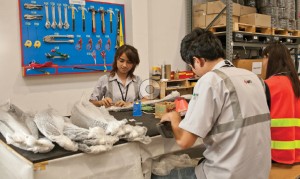 The elimination of import tariffs could reconfigure the supply chain. For example, tier ones in Thailand may invest more in Indonesian suppliers and move plants to surrounding countries such as Laos, Cambodia and Myanmar. The sector would experience more production and aftermarket parts trading within ASEAN.

Volvo’s Wang says that over the past couple of years, ASEAN has already increased its trade options. Besides fewer customs barriers and greater investment, including from global logistics players, there have been many road developments across the region, especially in Thailand. However, customs barriers remain. “The issue is the transparency of legislation and the way of working,” says Wang.

The ASEAN Highway made possible by the AEC would encourage the free flow of traffic, creating opportunities for domestic trucking. It could make sense to truck from China into Myanmar or Laos and then Thailand. However, the highway is not yet developed. Meanwhile, equipment changes are still necessary when crossing borders as well. Neighbouring Malaysia is Thailand’s largest road export recipient, but it is also the slowest growing one.

Car parts are among the largest road exports from Thailand to the adjacent Laos and Myanmar. Rarm Virutamasen at APL Logistics says AEC would promote multimodal transport efficiency. “We are witnessing road construction from Thailand to Cambodia and Myanmar,” he says.

Full implementation of the AEC agreement initially is unlikely. The first step would be to remove tariffs within ASEAN. The roads will come later, including the Thailand-Myanmar connection (although this is expected sooner).

3PLs on the march

Ramanathan says Visteon Thailand is increasing its use of warehousing and other third party services because more customers want to save space in their own plants by shipping sequenced kits. “Since Ford, Mazda, General Motors and Suzuki are in the same estate, we are able to serve them within 15 minutes,” he says.

Among Bosch’s challenges is that its overseas suppliers need two months lead time, which sometimes requires air freight to meet changes in model and demand levels, says Kuntom. Last year, Bosch’s 3PL began consolidating imports from Japan. “Now, we need to combine all services through a single provider to improve the service level, including inland transportation, shipment consolidation, sea freight and customs clearance,” says Kuntom. He thinks the change will reduce administrative costs and decrease lead times from Japan from 17-18 days to 13-14 days.

APL Logistics has made recent changes in its IT management. “Whereas previously we had a transactional approach to transport procurement, now we have a solution-based approach in which we assign larger volumes to preferred partners. The result has been improvements in on-time delivery and overall service,” says Virutamasen.

Christopher Tiffany, regional vertical lead automotive APAC at UTi, sees a big move toward consolidating parts for export. “Everything is moving to export consolidations, which is more lucrative involving trucking, materials management and crossdocks,” he says.

UTi receives harnesses for Lear from the Philippines into the free trade zone, repacks them from pallets into returnable totes, and releases them as call-offs. For Visteon, it provides inbound logistics and JIT/JIS service to Nissan. UTi also maintains a 5,000 sq.m area for Auto Alliance Thailand, a joint venture between Ford and Mazda, in the free trade zone, for which it handles export consolidations of pickup trucks. The provider also handles inbound air shipments from China and Germany, which Tiffany describes as a huge business.

Sirapon Amornsakaya, head of land-based operations for Southeast Asia at WWL, says GM and Ford are planning big exports from Thailand. “We are also seeing exports to Australia and New Zealand that Japanese OEMs such as Toyota and Honda are driving. Exports to Europe are growing and [exports] to North America will be coming,” he says.

WWL’s fleet of 150 trucks carried 140,000 units in 2013. It also provides yard management for GM, Ford and Mazda. In total, the company handled about 300,000 units last year and is expecting 250,000 units this year, including all of GM’s distribution. Amornsakaya says it does not currently provide road shipments from Thailand to Malaysia. “One must change trucks and trailers at the border, so ocean transport is more efficient. With the AEC agreement, crossing borders with Laos, Cambodia and Myanmar would be easier,” he observes.

Despite its limited capacity, WWL recently began serving the port of Yangon, Myanmar by ocean as sufficient road facilities are not yet in place to make the 300km trip from Rayong. “Infrastructure on the Thailand side is ready and the Myanmar side should be ready by next year,” says Trond Tønjum, vice-president and head of Southeast Asia for WWL.

Thailand’s major ports also have some advanced services, including conversion and post-production work. The RMA Group, an importer and distributor, operates a conversion facility at a free trade zone near Laem Chabang port for domestic and imported vehicles, which converts vehicles for military, cold chain and cash-in-transit, among other types. It currently imports and modifies Ford and Land Rover models; about 90% of imports are re-exported.

RMA also delivers finished vehicles to Phnom Penh, Cambodia and Vientiane, Laos by road and to Yangon, Myanmar by sea and road. Earlier this year, RMA opened its first Ford showroom in Yangon.

Raphael Thallinger, head of logistics, stresses the importance of efficient cross-border operations between Thailand and all neighbouring countries. It can be difficult as rules and regulations often change without notice. “Due to rapid changes in the region, we also need to integrate flexibility and reactivity factors,” he says.

Thallinger adds that if the AEC agreement is implemented correctly across all ASEAN countries, it will bring major trade opportunities. “Even so, important disparities exist between ASEAN countries, raising concerns about the feasibility of a global implementation in 2015,” he says.

“A gradual implementation could be a reasonable solution,” he continues. “With the AEC, we wish to see a reduction in cross-border formalities in the region. For example, it would be great to be able to use one Thai trailer in all neighbouring countries and vice-versa. At this point, we need to change the truck and trailer at the border. A highway would link all countries in the region.”

Thailand’s logistics infrastructure has contributed to its success as an automotive hub in the past decade. Further regional integration will provide opportunities to increase its logistics efficiency with improved sourcing and routing opportunities and fewer border delays, which should help make Thai production even more competitive.