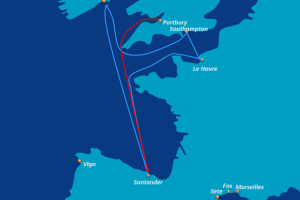 Short-sea operator, Neptune Lines, is adding a new ro-ro service between northern Spain, France, the UK and Ireland following a contract with Renault.

The company is dedicating two vessels to a direct, weekly service that it said would also serve all major customers in the region, covering vehicles, high and heavy cargo and special loads.

One service, called the Biscay Shuttle, will run between the ports of Santander in Spain and Portbury in the UK, deploying a vessel with capacity for 3,800 car equivalent units (CEUs). The other, on an Atlantic Loop service and with capacity for 1,800 CEUs, will run between the ports of Santander, Le Havre (France), Southampton (UK) and Rosslare (Ireland). Neptune said it was currently unable to disclose volume figures.

This latest service follows the addition of Setubal port in Portugal to Neptune Lines’ Atlantic-Black Sea route following a new contract with Volkswagen to the ship the Tiguan from there to Civitavecchia port in Italy.