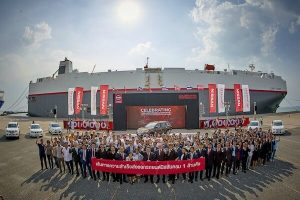 Foreign sales by the OEM from Thailand began with a Frontier sent to Australia in 1999. Since then, Nissan’s Thai assembly plants have now dispatched vehicles to 115 countries.

The Philippines, Australia and Japan were the top three export destinations by volume for Nissan in Thailand in 2018, followed by Indonesia, Malaysia, South Africa, Vietnam, New Zealand, Dubai and Oman.

To achieve this, Nissan works with around 250 companies in an automotive supply chain that employs approximately 170,000 people. The company’s 5,000-plus employees and “countless” Thai customers, dealers and suppliers have also played a role in achieving the export landmark, said Antoine Barthes, president of Nissan in Thailand.

Yutaka Sanada, senior vice-president for Nissan in Asia and Oceania, said: “We will continue to invest in Thailand’s automotive ecosystem to create jobs and help drive economic growth in Thailand. We remain steadfast in bringing the benefits of industry 4.0 to Thailand.”

Nissan’s plant in Samut Prakan province can produce 370,000 units a year. It also has a second factory at Bangna on the outskirts of Bangkok, which is the base for local and global export production of the Navara.

The company began producing in Thailand in 1960 and currently builds the Almera, March, Navara, Sylphy, Teana and Terra models in the country.