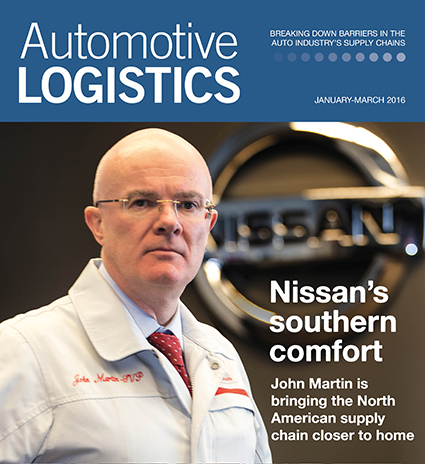 North America has become a region of superlatives for Nissan. The carmaker has grown to record levels in the US, where sales this year are likely to approach 1.5m units for the Nissan Group, including the Nissan and Infiniti brands, maintaining its position as the carmaker’s top global market. In Mexico, where it is now the undisputed market leader, Nissan has seen double-digit annual rises in 2015; it also now exports more vehicles from Mexico than it does from Japan.

Overall, Nissan Group, combined with its alliance partner Renault, which sells vehicles in Mexico, should surpass 1.95m units in sales across the continent in 2015, following a record 1.82m in 2014, while production will be around 1.8m – almost double as much as in 2009. Demand for some products, notably crossover SUVs like the Rogue, are so strong that Nissan has had to allocate extra capacity at global plants in the Renault Nissan Alliance.

“The market is good, the brand is appreciated, and we have been launching highly stylised products that are resonating. As they say in Tennessee, we’re riding the back of the hog,” says John Martin, who took over as senior vice-president of manufacturing, supply chain management and purchasing for Nissan North America, Inc., in January 2014.

The carmaker’s plant in Smyrna, Tennessee, 25 miles (40km) south of Nashville, is now the largest vehicle assembly facility in North America, a title gained in 2014 when it produced 648,000 units (a rise of 33% from 2013); at the time of writing the plant was set for another 640,000 units or more in 2015. While some OEMs have plants in North America close to one another that are collectively a similar size, such as Honda’s Marysville and East Liberty facilities in Ohio, the Nissan plant surpasses all in volume from a single location. And with products that range from the all-electric LEAF to the luxury Infiniti QX60, Smyrna has considerable model diversity.

Other articles in this series
“This is now the highest-volume plant in the US,” Martin says. “We’re confident that none of the US domestic brands or other transplants is anywhere close to achieving that scale in parts supply, logistics and services.”

A native of Dublin, Ireland, Martin still speaks with an Irish lilt, but seems at home in the US, whether in his dropping of southern farm references or his readiness to claim bragging rights for Nissan. However, he remains in awe of the country’s sheer size and complexity. “I always have to remind my colleagues from Europe or Japan just what we’re talking about here in geographic terms,” he says. “The whole of France would fit very easily into Texas. And a truck might drive for two straight days just to move between two or three states.”

Martin, who has worked across Europe and Japan with global oversight, also believes that American customers are the toughest to please of any in the world, including when it comes to the role logistics plays. “Nowhere is the landscape more dynamic on price, service and delivery,” he adds. “Dealers here will tell you that the longest a customer will wait for his new car is 48 hours, during which time he will cross-shop other brands for a more compelling offer.”

Where bigger is betterTo play its part in this American dream, Nissan needs to be among the biggest, fastest and most competitive, including in supply chain and logistics. Here, too, John Martin adds another superlative: he believes the carmaker’s US operations are the most competitive in the sector. “Through benchmarking we have validated that we are among the lowest cost for logistics in the US for all areas of our business; inbound, outbound and aftersales,” he says.

Part of the reason for this is Nissan’s plant locations in the south, which have good access to rail lines and equipment, along with a highly utilised truck network. The Smyrna plant is itself a gift to logistics and materials management thanks to the scale it offers: its two assembly lines, one for cars and another for SUVs, churn out 2,500 vehicles per day, both currently running three shifts, 5-6 days per week. Nissan also has contiguous stamping operations here and at all its North American plants (a strategy that contrasts to most US carmakers, who usually centralise stamping). Smyrna has Nissan’s largest global transfer press machine – five stories high, including two underground – along with 12 major press lines using 1,000 dies, which are used to stamp nearly 30m parts per year. Not far from the production halls, Nissan also assembles battery modules for the all-electric LEAF.

It is not just Smyrna at which bigger is better. Nissan’s second US automotive plant, in Canton, Mississippi, about 400 miles south-west of Smyrna, was heading towards 350,000 units for 2015 across eight different car, truck and van models. The two plants have become poles of consolidation, with dedicated trucking services moving between them and common suppliers moving on what Nissan calls a ‘logistics superhighway’.

Scale is also concentrated in powertrain production. In Decherd, in southern Tennessee, Nissan has two plants that build more than 1.2m engines. One is a partnership with Daimler, supplying four-cylinder petrol engines for the Mercedes-Benz C-Class in Tuscaloosa, Alabama, and for the Infiniti Q50 assembled in Japan (Decherd also exports V8 engines to Japan).

In Mexico, meanwhile, Nissan has capacity to build 850,000 vehicles per year between its three plants, two of them a few miles apart in Aguascalientes, in central Mexico, and another in Cuernavaca, outside Mexico City, which was the OEM’s first plant outside Japan. The carmaker is partnering with Daimler to build another facility in Aguascalientes called COMPAS (Cooperation Manufacturing Plant Aguascalientes), which will start making an Infiniti vehicle in 2017, and a Mercedes-Benz in 2018. 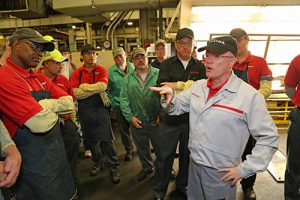 Nissan has been making considerable improvements to its logistics infrastructure in Aguascalientes, including an increase in intermodal transport for freight between the US and Mexico, as well as more automation within its plants. It also recently built a new vehicle yard, together with its outbound logistics partner, Wallenius Wilhelmsen Logistics (WWL), that handles vehicles for export by rail north to the US and Canada from both plants.

“We’re on the go in Mexico, with a highly educated workforce, great labour availability, government support and a highly efficient production and supply chain,” says Martin. “We know everyone is growing their presence there, but we have a pioneer’s advantage.”

Delivering weapons for sales and marketingWhile Nissan’s North American supply chain is humming along, there are pressures pushing it to be even more aggressive in consolidating scale and costs. An array of model launches and major redesigns, new plant locations, and increased Alliance activity with both Renault and Daimler, have made production and sourcing decisions more complex.

Nissan has also been adjusting its supply chain to changing consumer tastes, in particular a shift across the US towards SUVs and crossovers, including the Rogue and Murano, both of which Nissan can hardly build enough of to support demand. Martin already oversaw the move of Murano production from Japan to the Canton plant in November 2014. With sales of the Rogue way ahead of installed capacity in Smyrna, Nissan has also developed an international supply strategy, including production for the US market at a Renault-owned factory in Busan, South Korea since last year, and plans for more US-Rogue production in Kyushu, Japan.

Other US-built SUVs and trucks are climbing in sales, such as the Infiniti QX60 out of Smyrna. In November, Nissan launched the newest version of its Titan pickup truck, built in Canton, which includes a V8 diesel version. Future products and launches are also expected in the coming years for the OEM’s North American plants.As Nissan builds these models according to its flexible manufacturing system, which assembles different models and platforms on the same line, Martin’s supply chain team must manage big “mix shifts” between vehicles. For example, Nissan’s overall car sales in the US are stagnant or have declined slightly in 2015, even as trucks have risen by almost 20%, with the Murano and Rogue growing by 30-40%.

These shifts represent changes across the supply chain, including in managing supplier capacity and parts variety. To boot, although regulatory costs are rising, including those related to reducing emissions, improved safety or other compliance issues, customers are unwilling to pay more for them. Such costs must be mitigated, and Martin believes much can be done in purchasing and supply chain management.

“One of the reasons that I was posted here was to re-energise the focus on ‘TdC’,” says Martin, referring to ‘total delivered cost’, in which Nissan scrutinises cost impacts across all areas for sourcing and production decisions. “You have to make sure you are purchasing the parts that deliver all the necessary regulations and quality at the best possible cost after a supplier gets a reasonable margin, and make sure that you get it here and fit it at the lowest cost.”

In this way, purchasing and supply chain management are not just marginal efficiency gains, but “real weapons for sales and marketing”, Martin adds.

As an example, he points to the mid-sized sedan category in the US (known as the ‘D-segment’ in Europe), in which the Smyrna-built Altima competes. This has historically been a huge market in the US, but it is in relative decline compared to SUVs and crossovers. Martin calls it a “bloodbath” in price. However, at more than 2.2m units across the sector per year – and one that could grow further when fuel prices rise – it is a vital area for Nissan. 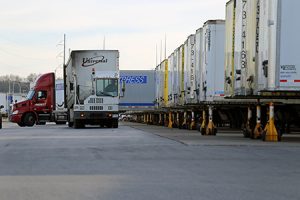 Nissan is trying to increase supplier localisation to reduce logistics costs, although it has engineered an efficient truck network, including a 'logistics superhighway' between its plants in Smyrna and Canton

“That is a very commodity-type marketplace, and I’ve got to give the sales guys the lowest price cars with the best quality that allows them a margin gap to flex the incentive levels to stay competitive and profitable,” he says.

There are several important strategies that headline Nissan’s total supply chain cost reduction. One has been Martin’s aggressive courting of suppliers to move closer to Nissan’s US plants – or even under Nissan’s own roof at one of its Integrated Logistics Centres (ILCs), which are local supplier parks. The carmaker has already launched an ILC at its plant in Canton, and it is currently installing one in Smyrna. There is also a park for synchronised suppliers in Aguascalientes.

“Suppliers are trying to re-skill and rebuild their organisations as they continue to emerge from the recession, but they are starting to run out of fixed capacities in the US,” says Martin. “I am asking, why would you build a plant in the Midwest when I have land and space available in the south that puts you closer to me and makes you more competitive?”

Along with this localisation, Martin and his team are working to mitigate the increase in part numbers and diversity by using more kitting prior to line-side delivery, which would otherwise require considerably more space and longer assembly lines. In particular, the company will increase the amount of kitting for its SUV line at Smyrna, which builds the Pathfinder, Rogue and Infiniti QX60.

Click here for part 2 in this series on Nissan North America.