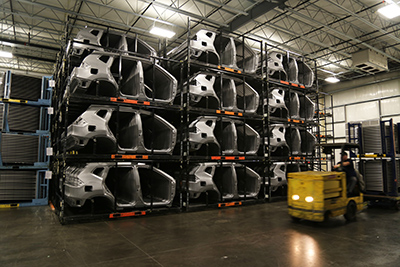 Nissan has been trying to draw suppliers from the Midwest closer to its US operations since as far back as 1983. Today, the carmaker’s huge volume, together with its new Integrated Logistics Centres at plants, could make it a more attractive proposition.

Within John Martin’s wide remit as Nissan’s head of production, purchasing and supply chain for North America, he admits logistics are not a top priority. He is happy to leave most day-to-day management and strategy to Mike Steck, vice-president of supply chain management, and the wider logistics team led by Chris Styles. Nissan’s annual logistics budget is significant in North America, but it is relatively minor across a larger parts and service budget of more than $12 billion in the US alone.

Martin estimates that supply chain management takes up less than 10% of his time, although it draws more attention when things go wrong, including during the rail capacity issues in the winter of 2014, or the port slowdown across the US west coast that lasted into early 2015.

Other articles in this series
Effective operations owe much to Nissan’s logistics network. Its Smyrna, Tennessee plant, for example, is well located for railcar supply, as the Nashville area is on the line of rail services moving south from Midwest plants, and so picks up empty wagons more readily than other locations.

Thanks to the concentration of volume between Smyrna and its plant in Canton, Mississippi, Nissan has developed a ‘logistics superhighway’ for suppliers between the locations. In these routes, dedicated trucks move between the plants and common suppliers in full truckloads and milkrun patterns. The body press and tooling for the Altima, for example, is based entirely at Smyrna, with parts moved to Canton, where Nissan builds additional Altimas, in dedicated trucks and packaging. With increasing flows between the US and Mexico for Nissan, the carmaker has also worked with its providers to develop similarly dedicated routes.

Nissan, which runs over 90% of its inbound parts ex-works, controls the responsibility for the majority of the inbound material for its plants. Its average ‘liquid fill’ rate for freight in its trucks – a measurement based on how many cubic metres of water the trailers would hold – is 70-75%, a level Martin considers an industry benchmark. Sea containers imported from Japan reach an average fill of around 70 cubic metres, which is the result of a packaging optimisation project led by Martin while he was in Japan.

“Our container packing is another benchmark that we’re sure about, as boxes are filled to the point where there is just about enough room to lift the parts in and out with a forklift,” he says. “That is important because it costs about $100 per cubic metre of air we ship.”

A time to head south?While day-to-day logistics and costs are well managed, the strategic impact of the supply chain is a “battle cry” for Martin, particularly in purchasing and supply agreements with tier suppliers that he would like to bring closer to his plants.

Nissan is already notable for a highly localised and integrated supply chain in North America. Around 95% of parts and materials originate within NAFTA, a regional localisation rate higher than any other global division across the Alliance. Its Mexican plants, meanwhile, source more than 80% of their supplies from Mexico. And while Nissan shares an increasing number of common parts with Renault globally, most are locally supplied in North America. 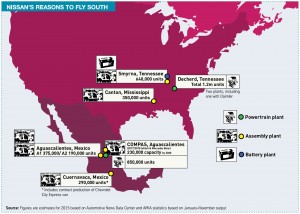 However, a long-awaited shift in the supply base closer to Nissan would be a historical reckoning as far as Martin is concerned. Since the early days of the Smyrna plant, which first opened in 1983, and later Canton in 2003, Nissan has tried to convince suppliers that it would be big enough to warrant moving to its operations from the Midwest.

While it has had success, a number of factors held it back. In the early-to-mid 2000s, for example, when the industry was at its previous peak, much of the volume was dominated by SUVs and large cars built by domestic carmakers, which meant suppliers had limited incentives to add new facilities in the south. Later, in the run-up and aftermath of the 2008-2009 recession, there was a hallowing out of the supply chain as many factories closed.

Nissan, however, has been a relative bright spot during the downturn and subsequent recovery. Its North American output fell from 1.2m units in 2007 to 995,000 during the low year of 2009 (a much more gentle decline compared to Detroit-based OEMs) and has since grown to close to 1.8m units per year. Production in the Midwest, where many US carmakers closed plants, hasn’t recovered its prior peaks. Other OEMs in the south, such as Mercedes-Benz, BMW, Toyota, Hyundai and Kia, have also expanded production.

However, with locations in the south less concentrated than traditional manufacturing areas in the Midwest, Nissan has tried to encourage local supply by offering real estate at its own sites. In 2013, it built a 1m sq.ft (93,000 sq.m) Integrated Logistics Centre (ILC) at the north end of the Canton plant, which brought suppliers onsite for various manufacturing and logistics activities. With the ILC in place, a second logistics centre at the southern end of the plant handles parts receiving and processing operations, and manages empty containers. Exel is responsible for logistics operations at the ILC.

Earlier this year, Nissan broke ground on a $160m, 1.5m sq.ft ILC at the southern end of the Smyrna plant. The ILC will combine supplier parts manufacturing along with logistics handling and container management. According to Martin, ten suppliers have signed up to move into the Smyrna ILC so far, which will start operations in 2016 and will be complete by 2017.

Reducing logistics costs is the main objective of the ILCs and the general push to localise suppliers. In particular, Martin is targeting large, heavy parts that don’t pack densely and therefore have higher shipping costs. He cites examples that include brake tubes and fuel tanks. 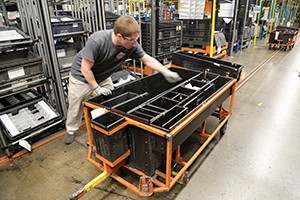 According to John Martin, the 1m sq.ft ILC at Smyrna will carry only 0.8 days worth of stock, and will empty and refill every day

He also contests the idea that the ILCs add inventory and waste. On the contrary, he points out that Smyrna, at 6m sq.ft including all of its stamping, forging and assembly, is not big for its output. The plant is currently running at 104% of its capacity, with an average of about 800 trucks passing through its gates everyday. As far as Martin is concerned, the ILCs will help recapture efficiencies lost during recent expansion, rather than increasing production or storage.

“At Smyrna, that 1.5m sq.ft will only hold 0.8 days worth of stock, and it will empty everyday,” says Martin. “It is not that big of a warehouse, and it will bring that many more suppliers near to us.”

While the ILCs are significant investments, they are shared across companies in Tennessee and Mississippi. Both the Canton and Smyrna ILCs are owned by separate entities and rented to Nissan, which subleases the space to suppliers.

Along with maximising land space at the ILC, Martin’s team is also assessing any other free space within the plant that suppliers could use. “We already have all the cockpit and front-end modules made on site in Smyrna by suppliers, and then moved directly to the assembly line,” he says. “I want to gather together all the underutilised space that we have and create big pitches that I will then offer to suppliers.”

Cleaning up the line sideWhile the ILCs and supplier relocations help Nissan to reduce shipping costs, John Martin and Mike Steck are also trying to reduce complexity in material handling within plants. One of the main strategies across all the US and Mexican plants has been an increase in parts kitting.

The carmaker has been expanding the amount of kitting in trim and chassis assembly, with dedicated parts supermarkets and pickers filling carts, which are then moved to the line by tugger trains or low-cost automated guided vehicles (AGVs). The kits then move the length of the trim and chassis line to supply operators; another cart is also filled with parts to move along the door dress lines.

“Kitting allows operators and shopfloor managers to focus purely on building a good car rather than what part they need,” says Martin. “It also helps me to eliminate forklift drivers in the assembly area, and it keeps the line-side spaces open.”

Nissan has already implemented a high amount of kitting for its car line at Smyrna, which builds the Altima, Maxima and LEAF. Some kitting has also been in place for the SUV line, but only about 25% of the planned projects are complete, with a “huge job” to finish, according to Martin. The SUV line builds models with a lot of variety; even the Pathfinder and the Infiniti QX60, which share a platform, are very different products, from bumper and fascia sizes to interior features.

In Canton, meanwhile, Nissan is about two-thirds done with its planned kitting projects, which help it to manage the huge variety of parts between the eight models of cars, SUVs and trucks built there. 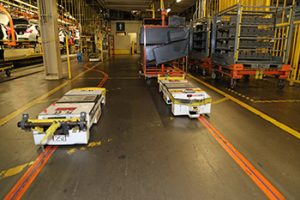 Even in Mexico, where the carmaker obviously has lower wages and currently builds less complex vehicles, it is putting in higher levels of kitting and automation wherever appropriate. Some parts of trim and chassis have kitting as high as 95%, with a growing use of AGVs. “We still automate like hell in Mexico because it is a low-cost automation,” says Martin. “Our Mexican plants are past masters when it comes to managing variety and automation.”

The expansion of kitting follows something of a global strategy for Renault Nissan, especially for models built on its new common module family (CMF) platforms, including in the UK, France and Spain (LINK).

Martin highlights that these strategies are very low cost for Nissan. It builds its AGVs in-house, for example, using battery cells from the battery module plant in Smyrna. They cost around $4,000 each. “I’m not talking about putting in a $100,000 robot to eliminate a worker per shift,” he adds. “I’m talking about maybe $10,000 worth of tugger trains, and a $4,000 AGV. So for perhaps $16,000 all in, I’ve automated the process, reduced the need for forklift drivers and cleaned up the line side. It is brutally efficient.”

Click here for the next part in this series.