Nissan North America part 4: No outsourcing on the cheap 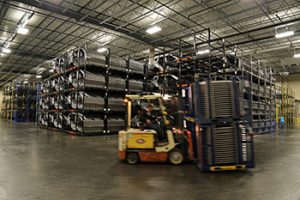 Logistics providers play important roles across Nissan’s supply chain in North America through different outsourcing strategies. For inbound logistics, the carmaker has a strong in-house team to manage transport lanes, working with a large mix of carriers and some third party providers. For in-plant logistics, Nissan also handles most operations in-house, although there are tier suppliers onsite that move material directly to the line. Nissan has also outsourced some operations, such as the Canton ILC to Exel, and it will also appoint a 3PL at the Smyrna ILC.

For outbound logistics, the carmaker has a close relationship with WWL, which acquired Nissan’s processing arm, DAS, in 2005. WWL manages a significant share of the carmaker’s vehicle logistics, including interacting with carriers and railway providers, while also managing its plant, distribution and port yards across North America.

While its outsourcing approaches are varied, Nissan is consistent in important ways. For example, third party providers are not responsible for sourcing transport and choosing carriers, as Nissan retains oversight and control of all contracts. Up until 2012, WWL purchased vehicle logistics services for Nissan, but the carmaker took that back over in 2012.

John Martin asserts that giving all the planning and sourcing for a critical area like outbound logistics to a single party doesn’t work. “It becomes a cost centre for the carmaker, and a profit centre for somebody else, which I believe is a contradiction,” he says.

Other articles in this series

More importantly, North American rail providers have been reluctant to wholesale their services to just any company. “The original premise of ‘4PLs’ was that they would become the dominant buyers of transport services and offer economies of scale, but it just hasn’t worked out that way,” Martin says. “So all of the purchasing is done here, and we find scale internally and across the Alliance.”

More broadly, Martin and Mike Steck, who heads up the supply chain department, agree that Nissan should only outsource what its executives understand internally, and never “on the cheap”. Outsourcing tasks that are poorly understood risks creating unclear operations. Meanwhile, chasing the cheapest bids has significant risks too.

“I’ve never seen a logistics provider come into a contract and manage it perfectly from day one, as the operations are just too complex and subject to change and variation,” says Martin. “That is why you have to look at a quote and check if the company is going too close to the bone to win the business.

“You need to remember that it will need enough cost to start up and stabilise the process,” Martin says. “I would rather see a realistic quote that has some inefficiencies built in for the ramp-up phase, after which we can lower costs every year. I don’t like to see logistics providers come to me with bare bones plans that inevitably mean costs will go up.”

Click here for the last article in this series.