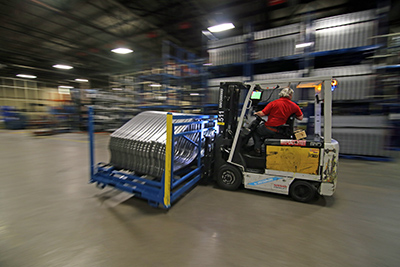 In recent years, the Renault Nissan Alliance has accelerated integration across its organisations, including the combination of management functions, as well as implementing cross-production and supply, common engineering, purchasing and logistics. In Europe, for example, the two carmakers have a combined unit that designs and purchases inbound and outbound transport. Supply chain and manufacturing management is also common at a global level.

In North America, where Renault has only a sales presence in Mexico, you might expect the impact of the Alliance to be quite minimal. But that is not the case. Nissan shares many parts with its partner globally, especially as the carmakers roll out more vehicles on the jointly developed Common Module Family (CMF) group of platforms. Between Nissan North America-built products and Renault alone, for example, there are 5,400 shared part numbers.

“The Rogue, which is the X-Trail in other markets, is built on the same CMF-C/D platform as the Qashqai as well as the Renault Kadjar, Espace and the new Mégane, so we are able to combine all of that sourcing,” says John Martin, who heads up production, purchasing and supply chain for Nissan North America, Inc.

While Renault and Nissan source these parts to the same specification and with the same suppliers, most are locally supplied from replicated tooling in different markets. However, where it makes sense, supply is concentrated at one or two locations and shipped globally. Examples include specialised transmission parts out of Japan, as well as some parts used for the Qashqai in the UK shipped to the US for the Rogue.

Other articles in this series
“That is in cases where the investment would be too high to dual or tri-source. Generally those are parts that have a high density and nest very well in containers, so we can bring them here efficiently,” says Martin. A growing number of parts are also exported from the US to Renault and other globalNissan plants.

Rogue assembly between the US, South Korea, and soon Japan, is a good example of an increasing global coordination of supply and production planning for the carmaker. Currently, around 64 US suppliers ship parts to South Korea for Rogue production. Much of the allocation of capacity and model specification is driven out of North America.

“We have a very specific grade strategy for the Rogue, as we are building the higher-end models with the most profit in Tennessee, while the Koreans and the Japanese are building vehicles at a lower specification,” says Martin.

Along with shared sourcing for global production, the impact of the Alliance is also important for Nissan in Mexico and the wider Latin American market. While Renault has a sales presence in the country, Nissan has full responsibility for the brand’s outbound logistics. Martin also reveals that Nissan is exploring the possibility of manufacturing Renault brand models in Mexico, particularly for pickup trucks that could be exported to markets in South America, where Mexico has several free trade agreements. Nissan already shares design and parts sourcing with Renault for the trucks it builds at its plant in Cuernavaca, outside Mexico City, for Renault products in several South American markets.

“From NAFTA, we are responsible for exporting parts from Mexico to Brazil, Columbia and Argentina pretty much without tariffs,” says Martin.Nissan also builds the Chevrolet City Express van on behalf of GM at Cuernavaca.

Mexico’s brutal efficiency Many aspects of Nissan’s American plants and supply chain make them among the biggest and the best, from integrated stamping and effective part variety management to good locations for railways and temperate weather. But John Martin is not one to rest on his laurels, and he points to factors that will require more efficiency gains in the supply chain.

For example, although Nissan has benefitted from low oil prices that affect everything from logistics to the cost of rubbers and polymers, he believes the price per barrel will rise. And even if market forces mean the price remains depressed for a prolonged period, he expects cost rises from regulations, such as stricter requirements for low-sulphur bunker fuel for shipping lines.

“Marine companies are reacting and buying bigger, more efficient vessels. Soon you will start to see 15,000-20,000 TEU ships with the widening of the Panama Canal,” he says. “We need to consider all of these approaches in our sourcing.” 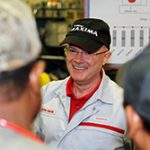 "The dirty little secret of the Mexican supply chain, and one of its risks, is that the tier ‘n’ supply chain is dominated in dollars"

A rising oil price could also change the model mix at plants yet again. Nissan is well served in this area with both sedan and SUV production across its US and Mexican plants. However, the push to keep this mix competitive will be harsh.

Martin believes that Mexico will also have wider supply chain cost impacts for US plants as well. The Latin American country’s importance for Nissan cannot be understated. As well as being a major production centre, it is Nissan’s fourth largest global sales market after the US, China and Japan, and the sixth across the Alliance. Renault Nissan’s Mexican sales were around 318,000 in 2014, and were up by 17% year-on-year in the first ten months of 2015.

For supply chain and production, Mexico is “brutally efficient”, which Martin thinks makes the US more competitive as well. With roughly the same installed capacity in the US and Mexico, each country acts as a yardstick to the other for cost and quality. “It is our duty as senior executives to make sure we get a return on our assets, and we can’t ignore that Mexico is lower cost than the US. Knowing they have a sister operation in Mexico is one of the things that drives the Americans to improve,” he says.

Nissan currently uses its Mexican plants to build smaller vehicles, including the Sentra and the Versa, as well as pickup trucks for local and Latin American markets. However, it will start building more expensive models for the carmaker, including Infiniti and Mercedes-Benz models through the new COMPAS joint venture with Daimler.

The good, the bad and the realityMartin admits that Nissan faces some infrastructure and capacity limits in Mexico, including congestion at the border and across the rail network. There are also questions around port handling and space in places like Veracruz. However, Nissan has so far seen little disruption across the Mexican supply chain. “The federal government is very aware of the importance of cross-border trade, and border security and customs generally work very well, despite public perceptions,” he says. “The NAFTA system overall is very effective, and we get a lot of benefits moving vehicles and material by rail across the border.”

Mexican ports are also working well. At the end of 2014 and early in 2015, during the labour disruptions on the US west coast, Nissan temporarily diverted part shipments bound for Long Beach, California to the port of Manzanillo. From there shipments were transported by rail to the US border. 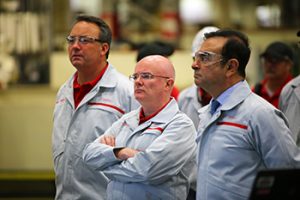 John Martin says that Mexico is among Nissan's most efficient production locations globally, and is a driving force behind efficiency in the US as well

While the efficiency of Mexico’s production and logistics is a competitive push for American operations, the North American network is also increasingly integrated. Production is linked across the border by a steady flow of truck and intermodal freight exchanges. Meanwhile, a deeper analysis of the Mexican supply chain reveals how intricately it is linked with the US. Martin points out that Mexico has limited capacity for producing raw materials. Although it has oil, the country has little processing, so it sells crude to the US where it is refined into petrol. Likewise, the US has more capability to make polymers and synthetic materials.

“Mexico also has almost no sufficient quality iron, such as hematite or ferrite, and no aluminium, all of which comes from the US,” says Martin, who studied chemistry and physics at Trinity College University in Dublin before working in manufacturing. “The dirty little secret of the Mexican supply chain, and one of its risks, is that the tier ‘n’ supply chain is dominated in dollars.”

Nissan is working with the Mexican government and suppliers to improve local capabilities, but the current supply chain exemplifies the integration and competitive element for NAFTA economies, which Martin believes is healthy.

Martin affirms that Nissan’s US plants are strong and will continue to receive investment, but he believes that they stand a better chance of success in future if they can compete openly against the best in the world, including Mexican plants. That will no doubt bring even more changes in the supply chain.

“Some of that change would include what we are doing in areas like automation and material handling with kitting,” he says. “But we have to go further, and get ready to weather the competitive storm that is going to hit.”

Ready to take a risk

Although Nissan’s North American operations are highly localised across the region, at around 95%, John Martin stresses the importance of using a global supplier base as well as the sourcing opportunities that the Renault Nissan Alliance offers. Although Martin was in Japan for the earthquake in 2011, he is not put off by even the “high probability” that similar or other unforeseen events will put the supply chain at risk. In fact, he thinks basing sourcing decisions on the possible risk of infrequent events to be “faintly ridiculous consultant fodder”.

“It never makes sense to restrict your supply chain even because of probable, let alone possible, risk,” he says. “You manage some risks strategically, but most risk you manage tactically day by day. That is why you have supply chain management teams and react with emergency service where necessary.”

Martin does make a distinction for strategic risk management, including currency hedges or avoiding a single source for critical components. The latter was a risk that the Japan earthquake highlighted dramatically in materials that ranged from certain paint colours to integrated circuit boards, many of which turned out to have a single tier two or tier three supplier. Similarly, a fire two years ago that shut down one German supplier revealed that it supplied 70% of the global market for brake tube lining. In those cases, Martin thinks it is sensible to have multiple sets of tooling in at least one other market so you can use premium air freight to other locations in case of shortages. In other cases, engineers should find the nearest and best possible alternatives.

During the west coast port slowdown, for example, Nissan avoided losing production through a combination of rerouting parts through Mexico, and using air freight. “We didn’t lose a unit, and it cost me in the low millions of dollars,” Martin says.

“The question is, do you want to trade the advantages of having the best supplier who just happens to be in Japan?” asks Martin. “No, you take every measure to make sure the supplier’s facility is prepared for a possible earthquake, which we have done. If I can save money and improve quality by buying a part from Japan, then I’m going to do it, and take the risk.”