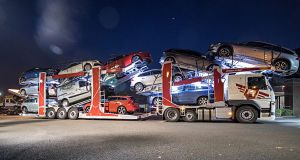 Rolfo has taken on board several suggestions from drivers who use its car carrying equipment in the latest update to its Ego 538 model for the UK market, launched recently at the Volvo Trucks UK headquarters in Warwick.

Wholly-owned by the Rolfo family, the 140 year-old company, based in Bra (Cuneo, Italy), is looking to continue gaining ground in the UK, which is now its second largest market.

“We launched this new 11-car configuration six years ago, and it has proved to be the right choice for the market conditions our customers operate in. We keep listening to the operator needs and make the required changes if they are interesting for others as well,” Davide Sobrino, MD of Unirolfo, the group company responsible for business development in the UK and Ireland, told Automotive Logistics.

The Ego 538 is the UK version of the company’s Ego short-long carriers, and reflects local regulations allowing greater height and length than those on the continent.

The company also presented two other carriers at the event, the Rolfo Venus and Rolfo Ego FTF which have innovative lifting systems dedicated to the movement of large vehicles. Both are capable of carrying three large vans and 8 to 11 cars.

The Ego FTF carrier was launched at this year’s Hannover show and is said to have “attracted much interest in the sector”.

Among the improvements is the use of special steels and manufacturing systems, which have made the transporters 500kg lighter than previous versions but with stronger decking.

The “focus of this year has been the simplicity of the loading process to simplify the training process and minimise damage rate,” said the company.

In total Rolfo will produce over 900 carriers this year.

In the last 12 months, Rolfo has increased the number of service centres in the UK, and at the start of 2016 the company also launched a web-based aftersales service platform, allowing workshops to purchase spare parts and obtain documentation online.