Vehicle output at Toyota’s plants around the Aichi Prefecture in Japan has been suspended because of flood damage caused by heavy rains in the area. However, the carmaker said it will reroute the semiconductors destined for those plants to others in Japan affected by the ongoing shortage in supply. 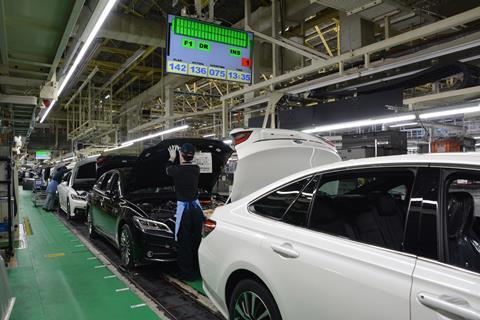 ”We will utilise the parts meant to be used during the partial plants/lines suspension caused by heavy rain damage in Aichi Prefecture and its surroundings,” said the carmaker in a statement.

Japan has been it by record rainfall from the south-western region and upwards over the last couple of weeks and that has affected output at the Motomachi, Tsutsumi and Yoshiwara facilities, all of which are in the Aichi prefecture. Flooding has knocked out supply routes and affected local parts suppliers. Toyota expects to lose production of 5,200 vehicles because of the damage caused by the heavy rain.

Toyota said it was revising down the period for which it was going to suspend production across plants in Japan in August.

“We will examine the parts supply closely to minimise sudden decreases in production, and continue to make every effort possible to deliver as many vehicles to our customers at the earliest date,” said the carmaker in a statement.

All plants in Japan will be closed between August 13-21 for the summer holiday.

Toyota’s global production forecast for August remains unchanged at approximately 700,000 units. Global sales in the first half of this year stood at 5.1m, a decrease of +6% on the same half last year. There was a more significant decline in sales for H1 within Japan, which stood at just over 954,000, a decline of 18%.

Toyota said it remained difficult to make accurate forecasts on production because of the shortage of semiconductors and the spread of Covid-19. The carmaker added it would examine the parts supply closely to minimise sudden decreases in production and maintain outbound delivery targets.