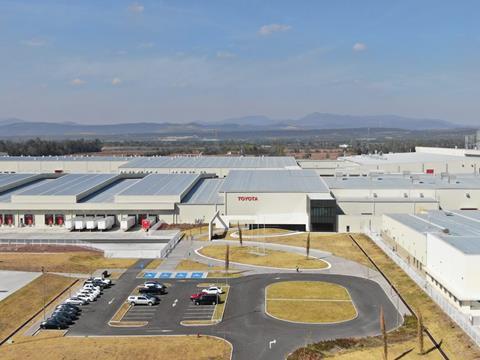 Following the start of production at its new $700m Mexican assembly plant in Guanajuato, Toyota has outlined its distribution strategy for the new model-year Tacoma pick-up trucks it is making there.

The first cars started coming off the line at Toyota Motor Manufacturing of Guanajuato (TMMG) on December 16 and volumes are ramping up in 2020. The Japanese carmaker is aiming for an annual output of 100,000 units at full capacity later this year.

The OEM will stop making the Tacoma at its US plant in San Antonio, Texas halfway through 2021.

The majority of the output from Guanajuato will be exported to the US on short-sea routes through the ports of Veracruz on the east coast and Lázaro Cárdenas on the west. The remaining volume to the US will be shipped via rail through the border town of Laredo in Texas. All vehicles for the domestic market are being delivered by truck.

“The plant has the highest technology and innovation for the manufacture of Tacoma, a high-quality vehicle that we are sure will be able to meet the demand of the North American [and] local market, with the pride of being produced by Mexican hands,” said Juan Francisco García López, president of TMMG.

Growth in exports
Mexico exports the majority of the vehicles it makes, which amounted to 2.8m vehicles between January and October last year, and the greater part of that figure (2.6m) is sent to the US and Canada, according to figures from the Mexican Automotive Industry Association. Total car production in Mexico over that period was 3.2m. Toyota exported just over 164,000 vehicles from Mexico, an increase of 4.3% over the same period in 2018, with an additional 5,000 distributed to the Mexican market.

Current Toyota production in Mexico is based at a plant in Tijuana, Baja California, which opened in 2002, and started making the Tacoma in 2004. Combined Tacoma production at both Tijuana and Guanajuato this year is expected to hit 266,000 vehicles, with a 166,000 of those made at Tijuana. Last year that plant made approximately 167,500 Tacomas, mainly for export to the US and Canada.

Toyota is also producing the Yaris subcompact at Mazda’s plant in Salamanca, as part of a joint venture project that began in 2012.

Overall production in Mexico dropped by 2.6% in the first ten months of 2019, and exports were down by 1.7%. Production was down because of a drop in demand from the US and Canada, as well as Brazil.

However, the signing of the US-Mexico-Canada trade agreement – called T-Mec in Mexico – is expected to lift northbound exports.

“Toyota is pleased the US-Mexico-Canada Agreement (USMCA) has been signed by the president,” said a spokesperson for Toyota. “The new agreement will provide much-needed certainty to the US auto industry, including the 179,000 Americans who earn their living working for Toyota. We look forward to playing a constructive role in its implementation.”

The Guanajuato plant was originally planned to make the Corolla passenger car but those plans changed in 2017 when Toyota announced it was building a $1.6 billion plant in the US in a joint venture with Mazda. The move followed threats from the Trump administration that the US would impose border tariffs on Toyota imports.

• In other news, Toyota in the US has invested an additional $700m to modernise its plant in Indiana, where it has the capacity to make more than 420,000 vehicles annually. The plant will focus on production of mid-size SUVs and minivans including the Toyota Highlander, Highlander Hybrid and the Toyota Sienna. The move is part of a wider reorganisation of Toyota’s regional production, which includes establishing a so-called ‘truck triangle’ in which Toyota’s plant in Texas and the two Mexico plants (which all make light trucks) will share resources and suppliers, and simplify processes.

The latest developments in the automotive sector in Mexico will be under discussion at this month’s Automotive Logistics Mexico conference, which takes place between February 25-27 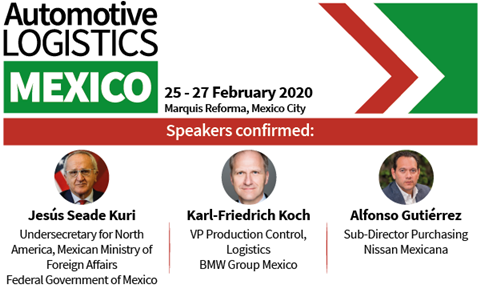 Ready to roll: Investing in a world-class supply chain

Mexico’s leading Automotive Logistics and Supply Chain conference is back on 25-27 February 2020 at the Marquis Reforma. Across three days you’ll have the opportunity to:

Book now to secure your place.
Complimentary places are available for vehicle makers and part suppliers.