Trump turns on Toyota over vehicle imports from Mexico 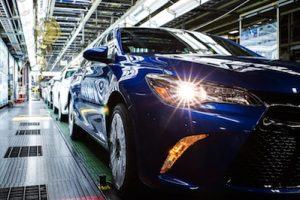 Following recent attacks on Ford and GM for existing and planned imports of vehicles into the US from Mexico, US president-elect Donald Trump has now turned his attention to Toyota.

In a tweet posted on Thursday (January 5th) Trump said: “Toyota Motor said will build a new plant in Baja, Mexico, to build Corolla cars for US. NO WAY! Build plant in US or pay big border tax.”

Earlier this week, Trump criticised GM for importing Chevrolet Cruze vehicles into the US from Mexico, saying it should be subject to a “big border tax”; while following previous criticism from the president-elect, Ford announced the cancellation this week of its planned plant in San Luis Potosi.

Trump’s criticism of Toyota is somewhat misplaced, as it not building a new plant in Baja; it already has a plant there in Tijuana, which builds the Toyota Tacoma. It is, however, building a $1 billion plant in Guanajuato, which it plans to open in 2019 and will make the Corolla, with a production capacity of 200,000 units a year.

The OEM said previously that its decision to build in Guanajuato was part of a broader initiative at Toyota to drive supply chain, logistics and production efficiencies between plants. It said the new plant would “leverage the existing robust supply base and transportation infrastructure in the region.”

Toyota defends positionToyota was quick to respond to the criticism from Trump, stating that neither production volume nor employment in the US would decrease as a result of the new Guanajuato plant.

It also suggested it was the smallest importer of vehicles from Mexico to the US in 2016. According to the figures from the Mexican automotive association, AMIA, for the period between January and November last year, Toyota moved just 124,000 vehicles north across the border, including to Canada (though Mazda and Kia moved fewer).

That figure is small compared with overall exports of passenger cars and trucks from Mexico to its Nafta neighbours to the north, which stand at 2.19m, or 86% of overall vehicle exports from Mexico (2.55m) over the 11-month period last year.

Toyota also produced a list of figures to emphasise its commitment to production in the US, pointing out that it had made direct investment of almost $22 billion and already had 10 manufacturing plants there. Recent expansions include that at the Georgetown plant in Kentucky, in which Toyota invested $360m and added 750 jobs. Toyota also pointed out that it exported more than 160,000 US-built vehicles to 40 countries and was helping to establish the US as a global export hub.

At the same time, however, the carmaker was careful to declare its willingness to work with the new political administration coming in this month.

“Toyota looks forward to collaborating with the Trump administration to serve in the best interests of consumers and the automotive industry,” said the company.

Whether Trump will act on his Twitter threats to impose heavy border taxes remains to be seen but, according to Thomas Cullen, analyst at consultancy Transport Intelligence, if vehicle manufacturers start to feel pressure to change their supply chain policies, global trade and logistics markets would come under substantial pressure.

“To take the Mexican example, much of production in Mexico relies on major components – including items such as engines and gearboxes – made in the US,” he said. “The reverse is also true, with Mexican plants acting as sources for parts for US production. Unravelling this supply chain structure would be possible but expensive and would have a major impact on rail and road freight across the US.”

Questions around US-Mexico automotive trade, potential changes to Nafta and other issues will be discussed in depth at the forthcoming Automotive Logistics Mexico conference taking place from January 31st to February 2nd in Mexico City.