Packaging experts working across the automotive industry are continually looking for better visibility when tracking the container and its contents to the point of delivery and back. 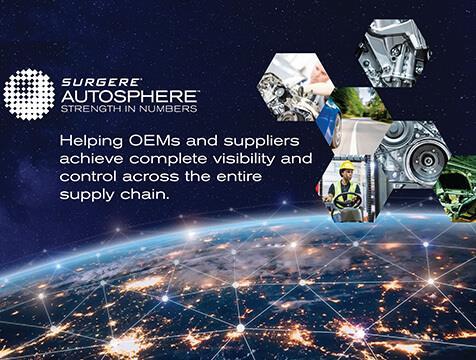 Packaging experts working across the automotive industry are continually looking for better visibility when tracking the container and its contents to the point of delivery and back.

Mismanagement of resources risks costly production downtime through misplacement or damage. To combat this, better connectivity is needed to improve tracking and monitoring, including the development of sensors that show locations and also give information on temperature, humidity and potential damage.

Developments in the digitalisation of track and trace have brought some major advances over the last few years. For instance, VW Group is looking to digitalisation to improve container tracking and the Audi division’s efforts to to tag and track containers used to deliver parts to the San José Chiapa plant in Mexico is a good example. BMW’s ‘connected supply chain’ initiative, which envisions using ‘smart packaging’ to capture significant data throughout the logistics chain, is another.

A growing AutoSphere
However, the industry has further to go in improving this visibility and what may be as important is the combination of this digitalisation of the container tracking process with a more open pool strategy, involving collaboration between carmakers and their top tier suppliers on sharing container assets. 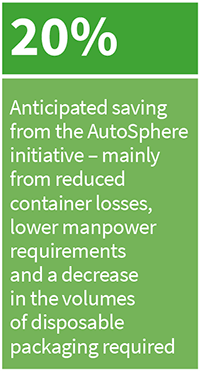 That is something that has been lacking while technology has advanced, but one step in the right direction was seen in the launch last year of the AutoSphere digital supply chain system (initially referred to as the Automotive Supply Chain Data Ecosystem) developed by US information technology and packaging specialist, Surgere.

Honda, Nissan, Toyota, General Motors and Fiat Chrysler Automobiles (FCA) have been part of the initiative from the set-up and, last year, Dana McBrien moved from his role as associate chief advisor at Honda North America to become ‘guiding architect’ for AutoSphere. McBrien held a number of roles in supply chain management at Honda.

There are now 50-plus partners in the AutoSphere initiative, trialling a new system designed to address the long-standing problem of visibility over returnable containers and parts throughout each company’s respective supply chains. Further to that, the project is establishing a 2019 OEM User Group, which Surgere’s president and CEO, William Wappler, says is focused on strategy and planning. Three additional OEMs are expected to join this year and there are 351 tier supplier sites currently scheduled for deployment, with another 200 being provided with schedules for the second half of this year.

AutoSphere is holding a meeting in February to build on the strategy for 2019.

“The projected outcome of the 2019 kick-off meeting will be the targeting and planning for extended areas in the automotive supply chain that can be made more efficient through massive collaboration,” says Wappler.

Shared data
AutoSphere uses passive RFID tags on returnable containers, a variety of RFID readers at various points in the network and a digital platform provided by Surgere to track, monitor and manage containers of parts as they move through the supply chain. The information on location is shared among the various parties.

During the initial solution design meetings, the AutoSphere members selected passive RFID as the common technology used to support the group’s processes and data management requirements. Surgere is providing software, hardware, and RFID tags that conform to the AutoSphere architecture. The software it is supplying is called COS, which connects participants, maintains and shares information, and analyses the individual user and community data.

Independent research conducted for the group suggests savings of 20% or more could result, according to Wappler. Those savings will mainly come from reduced container losses, lower manpower requirements and a decrease in the volumes of disposable packaging required. There are also gains from the ability to visualise and manage containers, and from the operational clarity generated by the vast amounts of data gathered, he stresses. “The analytics provided by data on this scale was not possible until the creation of the ecosystem,” says Wappler.

Those involved in the group can see shared data from their common supply chain, helping both OEMs and tier suppliers to better manage container flows, Wappler explains. That data provides the opportunity to create various performance metrics and measure themselves against the overall ecosystem.

The system monitors each container, checking whether it is in the right place at the right time and if it is performing as planned. It also monitors overall container quantities in the supply chain and projected need, triggering advanced shipping to counteract any potential shortfalls. Should a serious issue arise that is likely to cause a shortage of containers, an artificial intelligence (AI) feature in the software can alert all relevant parties to prompt further action.

Data capture
The system is based on a core database in Surgere’s cloud-based COS platform, which can be integrated with other systems including ERP, warehouse management and yard management systems, as well as various data capture devices. COS pulls all the information together, organises it, and acts as a virtual manager to help control sourcing, specifications, location, motion and disposition of containers. Surgere is supplying its SensorWare middleware, which collects and transmits RFID data locally, while also monitoring the system’s health.

Apart from providing its core technology, Surgere has also helped to source the RFID tags and readers (which consist of both gate and handheld units) and provided engineering support to test and tune them for accuracy, ensuring 99.9% data capture rates. Furthermore, it has assisted the technology vendors in terms of design and product specifications, and helped to train users.

Millions of containers will eventually be included in the system, with two RFID tags apiece.

Both tags and readers are being sourced from a variety of suppliers; as long as it meets the AIAG’s standards, any tag is acceptable, says Wappler. As long as they provide the accuracy needed, the same goes for readers.

Herding cats
Honda has completed a proof of concept to test the benefits and the reading accuracy of scanners. It is now working on internal funding to get the project moving in terms of resources and hardware. 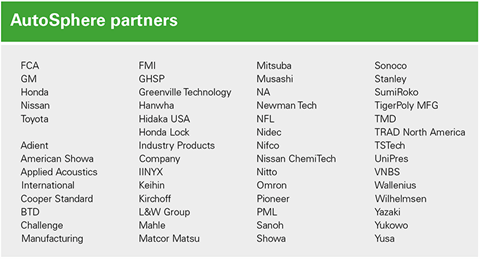 The OEM aims to implement the project over the next two to three years in the US, Canada and Mexico, says McBrien, reaching some 600 supplier locations including plants and warehouses. At sites handling large volumes – multiple truckloads of containers, typically – gate readers will be put in place, whereas for small suppliers who handle just a few pallets, handheld RFID readers will be used.

Wappler says the biggest challenge for the OEMs involves training up their own users and then deploying the system to their suppliers. McBrien says that ramping up the system at such a large number of Honda’s supplier sites will be a multi-year process. “The process of providing equipment, such as portals and handheld scanners, while getting all assets tagged and then testing them, is like herding cats,” he comments.

Meanwhile, Chris Styles, senior logistics director at Nissan North America, says that Nissan has also been working with some of its key suppliers – who have been involved in discussions with the AIAG on the project from the start – on proof of concept. This includes movements between one supplier and the OEM’s logistics centre and trials with GPS tracking of containers. All of this, says Styles, is helping Nissan to understand how the technology and tools can best be used.

The next steps, he says, are to continue working through additional proof of concept projects and then map out the deployment, which will happen over the next few months. Full-scale rollout across the whole group of OEMs and tier suppliers should follow the meeting in February, Wappler says, with further suppliers being brought on in 2020.

RFID standards
The working group behind this project involved the AIAG at an early stage to ensure that RFID standards were correctly applied in terms of labels, chips, data formats and readability standards.

McBrien says the AIAG wanted the process to be open source, so that any RFID tag-maker could access the standard. This is also important for the carmakers because it means that tier suppliers can easily get onboard. “This allows anyone to play,” he comments. 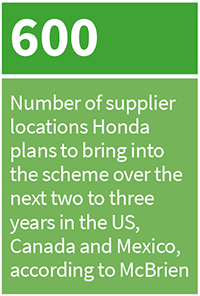 Lang Ware, director of supply chain products and services at the AIAG, says the association is providing a number of written shelf standards, such as for RFID tags and returnable item transfer (RIT) portals, which let users see where they are located, as well as where and when they are being used, and to identify any breakdowns in the system.

Although the AIAG is working on other large collaborative projects, for example in cyber-security, Ware points out that this collaboration involved an unusually large number of vehicle-makers and suppliers.

McBrien says that in bringing everything together at the start, there was an initial risk that the five OEMs would disagree or would have different ideas or interests, and that some might even break away. “But, if everyone does their own thing, we’ll have the same issue as before,” he warns.

Now that things have come this far, he is hoping to find new ways of using this technology. “They [the other OEMs] may say ‘we saw a problem and found a solution, but then we stopped because that problem was solved…’. However, in my opinion, we should be innovators and look for more ways to move ahead,” he says.

The group could also be opened up to other technology companies, principally sensor companies, as long as they can meet the 99.9% accuracy minimum. “We agreed to open it up to all tech companies,” he states.

The participants also hope there will be competing groups or new collaborations conducting similar projects. Vehicle-makers and other suppliers are likely to establish their own ecosystems, but this, too, will require working together for best results; if it is a single group, it will only have limited success, Wappler believes.

The growth in suppliers that have joined since the project was set up and the prospects for further growth following the meeting in February this year suggest that its success will not be limited.