How IoT is the next step in tracking components 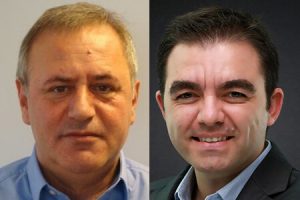 As vehicles incorporate more new technologies and highly sophisticated components, it has become increasingly complicated and expensive to ship these parts. Consequently, the risks for OEM shipments have increased proportionately. A sea container packed with $20,000 worth of car engines may take six weeks, or even longer, to travel from its point of origin to its destination – and ensuring that it arrives on time and undamaged is of utmost importance.

What, historically, has the automotive industry done to mitigate parts damage throughout the supply chain?

Back in the 1990s, while working as a materials handling engineer for Chrysler Corporation in Auburn Hills, Michigan, Agron Galimuna, now of Tri-Wall Austria Packaging Systems (pictured, left, with Krenar Komoni of Tive), was part of a Chrysler team that collaborated with counterparts from General Motors and Ford to build a test laboratory where the ‘Big Three’ could simulate packaging and shipping scenarios for the automotive industry. The mission of their joint research was to identify hypothetical supply chain problems and avoid costly packaging and shipping mistakes.

Fitted out with everything from an elaborate shake table to deep freeze refrigeration, the lab enabled the OEMs to replicate real-world variables, such as temperature, humidity, and mechanical motion, which can impact the quality of a product on arrival. Both the lab and the testing, however, were extremely expensive, and the data generated merely projected possible trouble spots; it never pretended to offer real-time guidance.

More than 20 years later, the automotive industry is poised for a revolution in its materials handling practices, to which Tri-Wall can attest as a provider of packaging and logistics services to OEMs such as BMW, Toyota and JLR. New technologies like Internet of Things (IoT), Cloud and mobile GPS tracking are coming together to create real-time monitoring capabilities that allow vehicle-makers to track components from the assembly line, throughout the logistics journey, to the product’s arrival at its final assembly point.

With real-time visibility into variables such as temperature, humidity and motion, vehicle-makers can capture potentially harmful incidents as they happen and quickly make corrections. Both the shipper and their logistics partners also have the ability to capture a detailed profile of temperature, humidity and motion data throughout the container’s journey. This information can then be processed with root cause analysis that identifies the exact time and place of real-time problems and presents opportunities for future avoidance.

Holding logistics companies to accountIn addition, real-time exception analysis makes it perfectly clear who is responsible for a shipment when an incident does occur. If a container is dropped and the product damaged, the product owner can see exactly where the accident happened and who was responsible.

[mpu_ad]Similarly, if a container was left sitting on a dock in salty air for several weeks, that data can shed light on the root cause when the container is opened and rust damage is discovered. The manufacturer can use the comprehensive location data to seek recompense from the responsible shipper. With the tools to measure these exceptions, instead of just asking “Why are my parts rusted?” the manufacturer can ask instead: “Why was my container sitting for six weeks on a dock?”.

Alternatively, the system may detect rough handling of the container during a particular time frame in a particular place. This may prove that the shipments were deliberately transported during a storm when the responsible course would have been to avoid it.

These systems can detect material handling aberrations with other transportation modes, too. For instance, air freight, which is the fastest but also most expensive mode of transport, unfortunately has the reputation for being the most physical challenging. However, with IoT tracking systems, we finally have a way of ensuring that these high-cost transports actually pay.

To be truly effective, IoT monitoring technology needs to be easy for everyone to use, as demonstrated during recent testing of a new IoT tracking product at a vehicle-maker in Austria. In this test, a sensor was attached to a car battery which was mounted on a forklift that was run over rough terrain to monitor the impact on the battery in real time. The IoT sensors quickly delivered a signal that showed up on a computer screen every time an impact occurred and the progress of the battery across the shopfloor was easily tracked.

With easy-to-use and effective applications such as these, IoT technology promises to make a big impact in the near future on how automotive manufacturers maintain the quality of their products throughout the supply chain.

Agron Galimuna is executive managing director at Tri-Wall Austria Packaging Systems and Krenar Komoni is CEO and founder at Tive.

Join supply chain and automotive IT experts from BMW, Daimler, GM, Magna, NIO, Pirelli, Samsung and many more at The Supply Chain Conference, as they strategize and outline practical steps for future automotive supply chains, on 19-21 March 2019 in Atlanta.