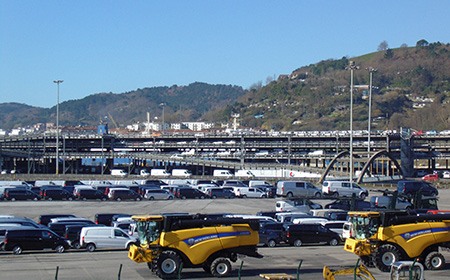 The northern Spanish port of Pasajes (also known by its Basque name of Pasaia) experienced a sharp drop in vehicle traffic over the first 11 months of last year. The port handled 215,119 units during the period – a fall of 8.8% compared to the same period in 2016, according to UECC Ibérica and Noatum Ports, which operate the finished vehicle terminal there.

The port authority said UECC Ibérica had blamed part of the drop on the “strong impact” on traffic brought about by the UK's decision to exit the EU.

Car exports from Pasaia, which currently account for around 90% of total terminal traffic, fell by 9% to 197,144 units in the period. The main export markets are the UK, Belgium, the Netherlands and Germany. Imports, meanwhile, fell 5.4% to 17,975 units.

The outlook for the current year, however, remains positive, thanks to the production forecasts of key manufacturers using the port. Mercedes-Benz, in particular, has suggested that 2018 will see records set for the third consecutive year, said the port.

Mercedes-Benz is now Pasajes’ leading customer, channelling 101,459 vehicles through the terminal in the first 11 months of 2017. Opel, which was previously the port’s most important client, generated traffic of 95,513 units in the same period.

'Brexit' is not the only reason for the fall-off in traffic from some OEMs at the port, however. General Motors, in particular, had already built up a large stock of unsold vehicles in the UK before the Brexit decision, prompting the company there to cut back on further imports. Other countries are understood to have had similarly high stock levels.