Pearlman takes over US rail for Toyota as Nelson retires 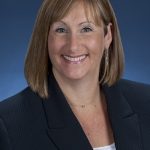 Pearlman has been with Toyota since 1994, spending most of her career with TLS in vehicle distribution centre (VDC) roles, including in field locations in Long Beach California, a major port of import for the carmaker, as well as in Georgetown, Kentucky, Toyota’s largest US plant. As logistics planning manager in Georgetown, Pearlman was responsible for the transport operations for the the 500,000 vehicles produced each year at the plant. [sam_ad id=6 codes='true']

Pearlman has also spent time at the TLS headquarters in Torrance as a manager in the field operations department, supporting 12 VDCs in North America in areas such as forecasting volume and labour, model launch planning, quality, contract and negotiations. In this role, Pearlman helped support the startup operations for numerous Toyota manufacturing and distribution operations, including its plants in Texas and Mississippi, as well as shared production with Subaru in Indiana.

She was most recently national logistics planning manager for TLS, with responsibility for budgeting, inventory and labour management at VDCs across the country.

Pearlman joined the rail strategy department in July of last year under Nelson, and will now have responsibility over Toyota’s significant rail operations, which she said made up around 1.8m vehicles for Toyota in North America during 2013.

“Our primary focus is on making sure our logistics network is positioned to handle Toyota’s North American automotive business now and in the future,” Pearlman told Automotive Logistics. “This includes making sure it’s efficient so we can control costs. The transportation budget is one of our highest annual expenditures, so we’re looking for any opportunities to reduce the cost per vehicle.”

A long and noteworthy logistics career 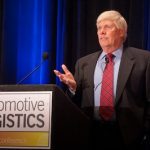 Nelson has been a well-known and respected figure across the sector. He was instrumental in the North American industry switching from securing vehicles on trucks with soft straps rather than metal chains, while more recently he worked with North American railways in efforts to increase velocity.

Nelson has also been a regular speaker and contributor to Automotive Logistics events, and played a key role in supporting the creation of FVL North America events in 2010. A video of his last presentation from Automotive Logistics Global in Detroit, which discussed his career with Toyota, can be viewed online.