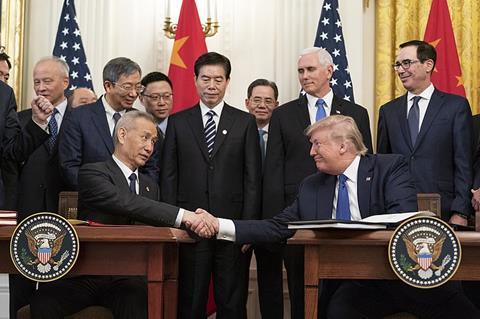 On the face of it last week’s signing of a ‘phase one’ agreement between the US and China is more of a truce than a substantial trade deal, though that is no less welcome given the two years of escalating tariffs between the two countries, which has affected a range of industries, including automotive.

The ‘Economic and Trade Agreement between the United States of America and the People’s Republic Of China’ aims to arrest the increase of tariffs imposed on Chinese goods under the US Trade Representatives Section 301 investigation, not the Section 232 investigation covering automotive. The US will maintain 25% tariffs on $360 billion-worth of Chinese goods, including automotive parts and vehicles. Meanwhile, China maintains tariffs ranging between 7-15% on $100 billion-worth of US goods, which also includes automotive content. Private companies and the consumer are picking up the cost of those tariffs.

In the chapter on expanding trade, China has agreed to ensure the import from the US of $200 billion in manufactured goods, agricultural products, energy products and services (based on the 2017 import baseline) between January this year and December 2021. Manufactured goods in this instance includes a wide range of goods for both passenger and commercial vehicles, as well as iron and steel, and electrical equipment. That equipment includes automotive parts such as ignition and lighting equipment, as well as “windshield wipers, defrosters and demisters, of a kind used for cycles or motor vehicles”. Semiconductors, used by the automotive industry amongst others, are also subject to tariff easing.

China has also committed to importing more energy storage systems and parts from the US over that period, which affects the the supply of materials for electric vehicle battery supply. At the same time the US has agreed to halve import tariffs on batteries made in China from 15% to 7.5% from the middle of February this year.

Tech and intellectual property
In the chapter covering technology transfer, the US and China have agreed that companies should not support direct investment activities or the provision of market access that seeks to acquire foreign technology. This had been the case under China’s previous law stipulating that foreign firms could only set up businesses in China, as many carmakers did, as part of a 50:50 joint venture that included the transfer of technology. However, China has been rolling back that requirement since 2018 and carmakers including BMW have already increased their stakes in the former joint ventures. Tesla has also gained approval to build its own privately owned ‘gigafactory’ in Shanghai. Nevertheless, including the agreement in the new trade deal clarifies the policy for companies investing in China.

In terms of intellectual property and trade secret protection, China and the US have agreed on “sustained and effective action” to stop the the manufacture and distribution of counterfeit products. China has said it will increase border enforcement to detect and seize counterfeit goods. There have been cases of counterfeit seizures in China in the past, including the $1m of fake Toyota parts discovered in 2016 on route to Australia, and there are a number of reports of fake aftermarket parts exported into the US from China. A previous report from Ipsos Business Consulting (IBC)warned that the market for counterfeit automotive service parts in China was set to grow, along with the country’s overall automotive industry growth. Figures included in the Ipsos report indicated the relative value of China’s counterfeit automotive parts market was 83% of the global total.

Following the signing of the deal last week the American Automobile Policy Council (AAPC), which represents the interests of FCA, Ford and GM at a US government level, welcomed the deal.

“AAPC commends the Trump administration’s efforts to secure a phase-one trade agreement with China,” said president of the AAPC, Matt Blunt. “It is pivotal that US trade negotiators and their Chinese counterparts use this momentum to complete a robust trade agreement. We look forward to learning more about the auto provisions and we are encouraged by the commitment to address additional issues in the next stage of the negotiations.”