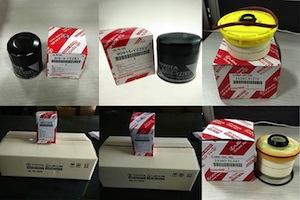 Police in China have seized a consignment of fake Toyota service parts worth $1m, according to Australia’s Federal Chamber of Automotive Industries (FCAI). The shipment, which was uncovered in Guangzhou on route for sale in Australia, consisted of 33,000 safety parts from 80 different part lines, including airbag and brake components. The action followed a tip off by Toyota Australia.

According to the FCAI, the replica parts were produced in a large-scale manufacturing facility. Authorities also identified around 55,000 packages branded in the style of Toyota Genuine Parts, complete with barcodes and serial numbers.

Last year, Toyota Australia lodged Federal Court proceedings against two independent retailers that had been selling counterfeit airbag spiral cables advertised as genuine Toyota parts. Internal testing found they were of inferior quality and posed a number of potential risks to customers. The OEM also forced an online retailer to recall counterfeit brake pads that were found to contain asbestos. The brake pads were sold by online supplier Westend Spares between June 2013 and October 2015.

Toyota was keen to stress the difference between genuine, non-genuine and counterfeit parts. While non-genuine parts – those made by alternative suppliers – are legal and often made by reputable parts suppliers, counterfeit parts are dangerous as they purport to be genuine, but are often untested and subject to flaws.

As previously reported, the market for counterfeit parts in China is on the rise and is costing the industry billions. Fake parts from China have turned up in the European Union, the United States and the Middle East, to name just three regions.

The FCAI is warning consumers to be aware of the global nature of the counterfeit parts business and the dangers of using fake parts in the service or repair of their vehicles. It has launched a Genuine is Best initiative to highlight the safety, performance and durability benefits delivered by genuine replacement parts.