Construction to start on Tilbury expansion 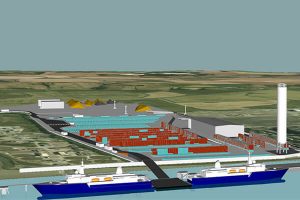 Construction is to start in a matter of weeks on expansion at the port of Tilbury, in the UK, after owner Forth Ports Group received consent from the government to build Tilbury2 on the 61.5-hectare site of a former power station, next to the existing 376-hectare port at Thurrock, to the north-east of Greater London.

Expansion is essential for the port to cope with rising demand for imported and exported cars and from other sectors it serves, said the company.

The new port should begin operating in the second quarter of next year will be the UK’s largest unaccompanied ferry port and biggest construction processing hub, with authorised economic operator status from the British government, stated Forth Ports Group.

The expansion, costing more than £200m ($255m), will include new rail and road connections, storage areas for vehicle imports and exports, a deep-water jetty, a floating pontoon, and a ro-ro terminal for containers and trailers going to northern Europe, in partnership with P&O Ferries. The construction project has been awarded to Graham of the UK.

Forth Ports Group said Tilbury’s business had doubled in the past decade and the volume of cargo it handled was projected to double to 32m tonnes in the next 10-15 years, implying a rise in directly-employed staff from 3,500 to 12,000.

The development comes despite a continuing lack of agreement about trade and other related arrangements with the European Union (EU) ahead of the UK’s scheduled departure from the trading bloc on March 29 – a situation that remains a major concern for the automotive sector in terms of potential additional customs requirements adding costs and complexity to embarkation and disembarkation processes.

Commenting on go-ahead for Tilbury2, Forth Ports’ CEO, Charles Hammond, said: “[It] will deliver much-needed port capacity to support businesses importing and exporting to and from Europe and the rest of the world. The terminal will be fit-for-purpose for the UK’s departure from the European Union, utilising the latest technology and streamlined border processes, in support of continued market demand created by business growth.”

Tilbury2 will serve the construction industry and commercial ferry traffic, which carries consumer goods, perishables and steel between mainland Europe and the UK, as well as the automotive sector.