GM to build Chevrolet electric vehicle in US 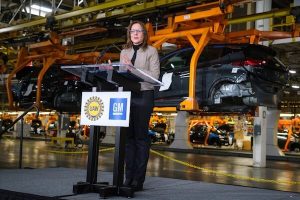 GM is to produce a new Chevrolet electric vehicle (EV) at the company’s Orion Township assembly plant in Michigan, instead of abroad as initially planned.

Factors influencing the decision to build at a US manufacturing plant include supporting rules-of-origin provisions in the new US-Mexico-Canada trade agreement (USMCA), the company said.

Also, the Orion plant already produces the Bolt EV and the new Chevrolet EV will be based on an advanced version of the same vehicle architecture.

A spokesman for GM declined to give details about inbound supply arrangements or intended sales markets for the EV, but did say that additional product information and timing for the new vehicle would be released closer to production.

GM said the new EV would bring a $300m investment and 400 extra jobs to the Orion plant, as part of a company commitment to invest $1.8 billion in US manufacturing operations, creating 700 new jobs and supporting 28,000 others across six states.

CEO Mary Barra (pictured) said: “This new Chevrolet electric vehicle is another positive step toward our commitment to an all-electric future. GM will continue to invest in our US operations where we see opportunities for growth.”