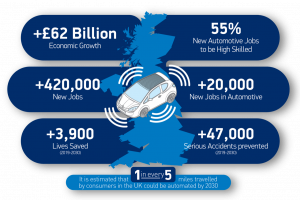 A new report published by the Society of Motor Manufacturers and Traders (SMMT) and industry analyst Frost & Sullivan has revealed that the UK is the top location worldwide for the development of connected and autonomous vehicles (CAVs). Government and industry have committed £500m to CAV research and development, a number of trials and projects have already taken place, and the country has introduced legislation to facilitate the deployment of such vehicles, the report explains.

As a result, the country could benefit from a forecast £62 billion in “annual economic benefits” for CAV deployment by 2030, according to Connected and Autonomous Vehicles: Winning the Global Race to Market. The report estimates that one in five miles travelled by vehicle users in the UK could be automated by 2030.

However, the industry will need “sustained support from government”, including an orderly departure from the EU that maintains technological collaboration with European partners, according to the report.

The SMMT, for its part, believes that a no-deal Brexit would result in lasting damage to the UK’s reputation as a politically stable destination for inward investment, putting the potential benefits of CAV development at risk.

“A transport revolution stands before us as we move to self-driving cars and the UK is in pole position in this £62 billion race,” said Mike Hawes, CEO of the SMMT, at a press conference ahead of the association’s Connected event last week. “Government and industry have already invested millions to lay the foundations, and the opportunities are dramatic: new jobs, economic growth and improvements across society.”

For the vehicle user, the use of CAVs could save almost 42 hours in travel time annually and increase average speeds per journey by 20% because of reduced congestion and smoother traffic flows.

Sarwant Singh, senior partner and head of mobility at Frost & Sullivan, added that 78% of all journeys in the UK are carried out by car and that 20% of the miles covered could be autonomous. The UK is likely to start deployment with short journeys completed by automated taxis in geofenced urban areas, he said. 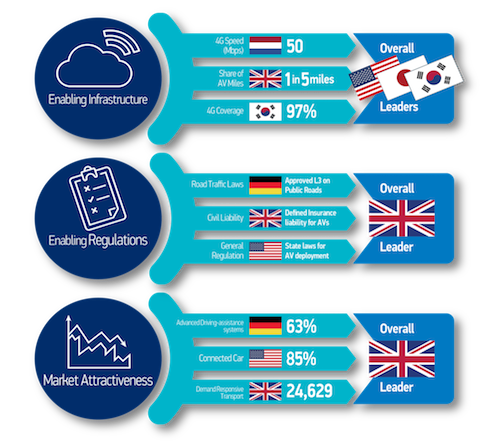 Essential building blocksDespite recent setbacks, Hawes said that UK automotive was far from being “a sunset industry” and claimed it was instead at the forefront of innovation – although he also pointed out that Brexit was continuing to waste valuable time and investment.

“We need the deadlock broken with ‘no deal’ categorically ruled out and a future relationship agreed that reflects the integrated nature of our industry and delivers frictionless trade,” he said.

The Connected and Autonomous Vehicles report identified three critical areas which together give the UK its number one ranking and will be a focus of continued effort to build on this position: supportive regulation, enabling infrastructure and an attractive market. The UK comes top for regulations and market attractiveness, and a close second for infrastructure behind the US, Japan and South Korea.

The UK is currently host to more than 80 collaborative projects geared toward connected and autonomous driving, while it also boasts four major CAV test beds and three additional test sites for highways, rural and parking. In terms of regulations, the UK already has the world’s first insurance legislation for autonomous vehicles and is also in the processes of conducting a comprehensive review of road transport.

“The UK already has the essential building blocks – forward-thinking legislation, advanced technology infrastructure, a highly skilled labour force, and a tech-savvy customer base – to spearhead CAV deployment over the next decade,” said Frost and Sullivan’s Singh.

“However, it will require sustained and coordinated efforts by all key stakeholders, especially the government, to realise the significant annual economic benefits forecast for the UK from CAV deployment by 2030 and drive the vision of safe, convenient and accessible mobility for all.”

Connected and Autonomous Vehicles: Winning the Global Race to Market can be downloaded here.