The Russian government has greenlit an executive order banning European Union haulage trucks from crossing borders into Russia’s territory. Though actively lobbied by several Russian business groups during the past few months, this step promises to further increase logistics costs and hamper the remaining automotive trade.

The ban applies to two-way transport, transit, and transport from or to a third country, and came into force on October 10. The restrictions affect international cargo transport on Russian territory for transport companies from the EU, Ukraine, the UK and Norway. It follows a petition to ban European trucks from Russian roads, filed in June by the the Russian Association of International Road Carriers. 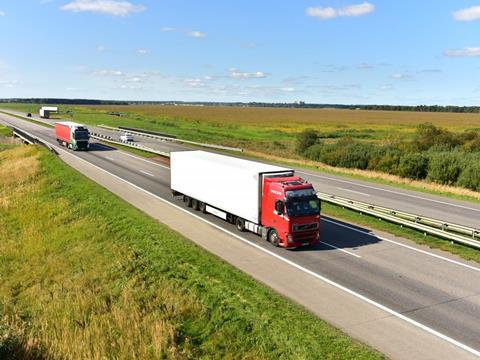 It follows a fifth sanction package from the EU that has closed access to its territory for Russian and Belarusian cargo carriers. In response, Belarus has adopted a mirror ban, which requires carriers to re-couple semi-trailers or reload cargo at border customs terminals. The Russian government was reluctant to take the same step.

Logistics costs
The Russian association of international road carriers (Asmap), which actively spoke in support of the new sanctions, estimated that, taking advantage of their monopoly position on the market, European carriers raised their tariffs on deliveries to and from Russia by 200% to 400%. Under the new conditions, the logistics costs are expected to drop, the association said.

However, most market players expect logistics costs to rise because of the sanctions. Julia Shlenskaya, general director of the Russian customs broker KBT, told the Russian newspaper Kommersant that a large number of European companies were already reluctant to work on the Russian market, and the sanctions could discourage some of the remaining cargo carriers from continuing to operate in Russia.

“This [new sanction] will significantly narrow the already small circle of surviving carriers, create favourable conditions for the emergence and consolidation of monopolies, for example, large Belarusian carriers,” Shlenskaya said. She added that eventually, Russian customers would see shipping bills rise as happened after the introduction of the European sanctions.

Evgeny Dyatlov, head of the procurement department at FM Logistic, agreed that logistics costs would increase because of the restrictions, adding that some European carriers raised tariffs from October 22, shortly after the sanctions were imposed.

A source in the Russian market, who wished to remain anonymous, told Automotive Logistics that the new sanctions would raise both logistics costs and delivery times. Reloading cargoes at transit points also risks damage to the product, which is critical for automotive components supplies.

In addition, Russian cargo carriers could experience difficulties executing orders because of an acute labour shortage, according to Kommersant, citing market participants.

All in all, Russia’s decision to introduce the bans on European haulage are likely to do it more harm than good, according to the source. It will bring no benefit but instead further inflate logistics costs on much-needed products. The source also admitted the measure was introduced only to save Russian cargo carriers and logistics companies that found themselves on the edge of bankruptcy.