Toyota and Kenworth unveil fuel-cell truck at port of LA 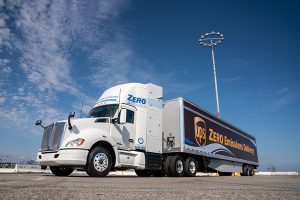 Toyota and Kenworth Trucks have unveiled their jointly developed heavy-duty, fuel-cell truck at an event held at the port of Los Angeles. The companies will deploy ten such trucks to move freight received at the port, and at the neighbouring port of Long Beach, throughout the LA basin. Four of the trucks will be dedicated to Toyota Logistics Services to move parts inland. The rest will be shared among United Parcel Services (3), Total Transportation Services (2) and Southern Counties Express (1)

The deployment of the trucks is part of the Zero and Near-Zero Emissions Freight Facilities Project (Zanzeff), which aims at “transformative emission reduction strategies” at freight facilities across California, using hydrogen fuel cell and electric technology to move goods on the roads.

The California Air Resources Board (CARB) has awarded $41m dollars to the port of Los Angeles for the Zanzeff project as part of California Climate Investments, an initiative for investment in projects focused on reducing greenhouse gas emissions, strengthening the economy and improving public health and the environment.

The latest truck expands on the capabilities of Toyota's first two Project Portal test trucks, which were trialled in 2017, and offers an estimated range of more than 300 miles (480km) per fill, twice that of a typical drayage trucks average daily duty cycle, according to Toyota.