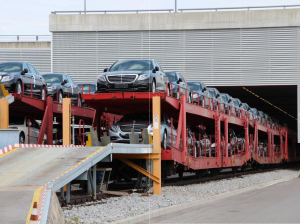 Following the announcement in June this year that the Slovenian port of Koper will be handling Mercedes-Benz volumes from plants in parts of central Europe and south-eastern Europe, the port operator, Luka Koper, has confirmed that export shipments have now started to the Far East.

The first shipment of 600 vehicles left the port last week and it is expected to handle more than 100,000 vehicles a year for the carmaker. Luka Koper processed 519,000 finished vehicles in total last year.

The port of Koper is the third European port for overseas exports of Mercedes-Benz vehicles, along with Bremerhaven in Germany and Zeebrügge in Belgium. A spokesperson for the carmaker said the port’s location on the Mediterranean Sea allowed for shorter transport routes on land and by short sea.

"The decision of Daimler to choose our port is a great honour for us but also a great responsibility,” said Luka Koper’s CEO, Dragomir Matic, who was speaking at an event to mark the first volume shipment. “I am convinced that with the quality of our services in the port and the reliability of transport links with the port hinterland we will justify the confidence of the German partner in the Slovenian logistics system.”

The port of Koper is believed to have beaten the Spanish port of Barcelona and the Italian port of Savona, for the contract with Daimler.

Daimler will move the cars by rail to the port from plants in Germany and south-eastern Europe. Koper currently has two daily rail services to Munich. The carmaker has not confirmed the routes or the specific plants that will supply the volumes but a spokesperson did confirm that along with Luka Koper it will be working with the following transport and logistics providers: Slovenian logistics provider InterEuropa, ro-ro carrier MOL, rail providers DB Schenker and ARS Altmann, along with a number of other freight forwarders.