Around 3,500 Nissan vehicles are reported to be adrift in the Pacific Ocean between Japan and Hawaii following a fire aboard the Sincerity Ace car carrier operated by Mitsui OSK Lines (MOL). 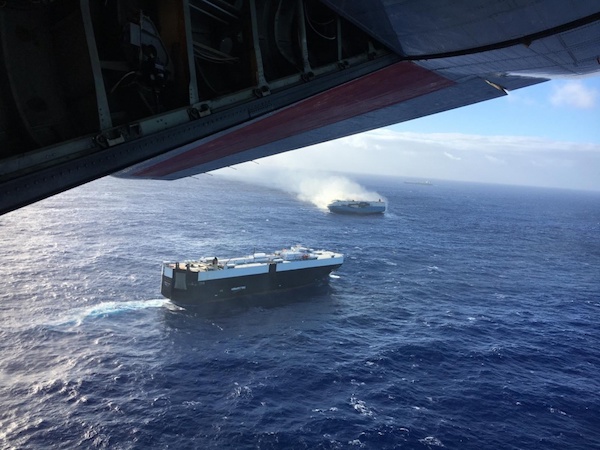 Picture courtesy of US Coast Guard

The cause of the fire, which broke out on Monday December 31, is still unknown but the crew of 21 aboard the vessel were unable to extinguish it and were forced to abandon the vessel. The US Coast Guard and Navy coordinated the rescue effort with other merchant ships in the area but because of difficult search conditions and rough weather, only 16 crew members were rescued.

According to a statement from the Sincerity Ace’s owner, Shoei Kisen Kaisha, when the tug Koyo-Maru arrived on scene the crew was instructed try and recover the bodies of the remaining five crew members, together with assistance from another vessel the owner chartered. The tug crew has now turned its attention to the ship. Vessels transiting the area are now being asked to look out for the bodies of those five remaining crew.

“Our thoughts and prayers are with the crew and their loved ones during this difficult time,” said the owner. “Our company is working closely with our crewing department to ensure everyone is being properly cared for.”

Shoei Kisen Kaisha is the shipowning and leasing arm of Imabari Shipbuilding.

A spokesperson for Nissan in the US said the carmaker currently had no information on the condition of the vehicles aboard the vessel but was working closely with its supplier partners on the issue. “Our thoughts continue to be with the crew members, as well as the safety of the rescue teams,” added the spokesperson.

The Sincerity Ace was on route to Honolulu with vehicles loaded at Yokohama and Kanda in Japan. Its exact location is unclear but when the fire broke out it was in a remote position around 1,800 nautical miles north of the Hawaiian island of Oahu. The last report from the US Coast Guard said that the vessel remained adrift and on fire, and was listing to starboard.

The Panama Maritime Authority is to launch an investigation into the incident and what caused the fire, according to maritime communications specialist, Ships & Ports.