8
In the zone at Jebel Ali port
Ports and processors

In the zone at Jebel Ali port

The automotive industry in the Middle East is based upon an import model, and since vehicle ownership is on an upward trend, this means that ports such as Jebel Ali and their associated special econonic zones need to be prepared to handle greater volumes

With a multi-tier parking facility holding around 27,000 car equivalent units (CEU), Jebel Ali is the biggest port in the Middle East and the 11th largest worldwide. The port has four terminals connecting to more than 150 other ports through 80 weekly services, and its activity accounts for 26.1% of Dubai’s GDP. In 2018, 82% of Dubai’s automotive trade passed through Jebel Ali, worth $31.6 billion in vehicles, tyres, parts and accessories.

Moreover, this trade is on an upward trend. UAE’s automotive market is set to increase by 35% between 2017 and 2021, according to estimates from the Dubai Chamber of Commerce and Industry. Jebel Ali will also benefit in its role as a point of entry to other nations in the region; automotive trade in the Gulf Corporation Council (GCC) countries was valued at $55 billion in 2018.

The port, which is run by DP World, is located in the Jebel Ali free trade zone (Jafza), where commercial advantages include exemption from corporate tax for 50 years, no personal income tax and no import or re-export duties.

With more than 520 automotive companies involved in vehicle and parts distribution in the region, Jafza is widely regarded as one of the main drivers of Dubai and the UAE’s economic growth over recent years. “For the automotive industry, where slow-moving bureaucracy can put a hard brake on just-in-time flows, special economic zones (SEZs) have been attractive for setting up distribution and modification centres for vehicles and spare parts, helping to reduce inventory and trade costs,” says a spokesperson for DP World.

“If you’re an OEM and you need to serve Saudi, UAE and Oman etc, you need to spread your services all over the place, but at Jebel Ali you can do it from one single point and then just do the last mile. You could call it an automotive fulfilment centre” – spokesperson, DP World

Citing emerging markets, including those in many parts of Africa, the spokesperson argues that it is becoming increasingly important for such zones to be part of wider international economic strategies that can tap into local skills, services and logistics.

“For industries like automotive it rarely makes sense to develop supply chains in isolation. SEZs are also enjoying new opportunities, as advanced economies in North America and Europe show more interest in developing such areas, both to deal with trade rules, as well as to connect new, high-tech value chains,” states the representative.

For automotive, this could include expanding vehicle production capabilities. “Whilst SEZs have long been centres of logistics and light assembly, there is also more potential to exploit their benefits for vehicle production, whether for new vehicle technology, or in establishing new manufacturing centres in expanding markets such as in the Middle East and Africa,” he says.

In Senegal, Egypt, Somaliland and Namibia integrated logistics and free trade models are beginning to empower the domestic automotive sector, according to the representative, pointing out that carmakers including Mercedes-Benz, Volkswagen, GM, Toyota, PSA and others are investing in OEM facilities in the region’s free zones.

Perfectly placed
Jebel Ali’s facilities are close to Al Maktoum International Airport and connected by the Dubai Logistics Corridor, which links the port, free zone and airport under a unified customs bond. Its terminals are spread over 25km of quay length hosting over 100 berths, with a handling capacity of 22.4m 20-foot equivalent units (TEUs) and 1m vehicles. As for rail, Etihad Rail UAE will have a depot within the Jebel Ali facility and will be operational by 2020, spanning 1,200km connecting the UAE to the GCC.

The port offers short and long-term storage for finished vehicles in both bonded and non-bonded zones, a quayside multi-story car park and a premium multi-story car park, which provides cover for vehicles prior to pre-delivery inspection in order to protect them from dust.

On average, vehicle carriers spend three days or fewer at the port. “The transit times in the region are now so short,” says the spokesperson for DP World. “It’s all about cost. If you’re an OEM and you need to serve Saudi, UAE and Oman etc, you need to spread your services all over the place, but at Jebel Ali you can do it from one single point and then just do the last mile. You could call it an automotive fulfilment centre.” 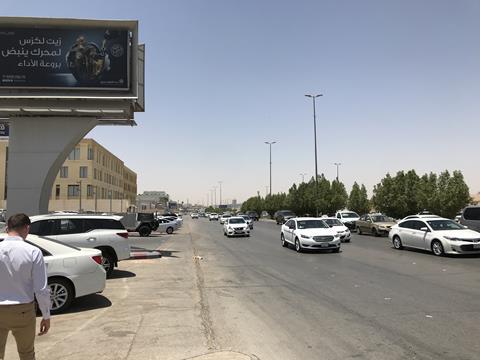 Growth in vehicle ownership is predicted in the Middle East, leading to opportunities for logistics and service parts providers

“When you include the introduction of the hyperloop [high-speed transport system] in the Middle East, wouldn’t it be fantastic to think that if you had a breakdown in Saudi Arabia you can get the spare part from Jebel Ali port in two hours?” he says.

When it comes to the used car market, more than 70% of the UAE’s used cars imports come through Jebel Ali, which sees 54% of regional throughput. There is a dedicated zone catering to the used car segment for re-exports: the Dubai Auto Zone. Launched in 2000 by DP World, the area has become a trading hub for the pre-owned vehicle trade in the UAE.

“It provides a range of services for the industry in one place, meeting the business requirements of buyers, sellers, service providers and government organisations such as Dubai Customs’ inspection operations and documentation and the Dubai Road Transport Authority,” says the spokesperson.

The port also handles more than 300,000 TEUs of spare parts, amounting to almost $8.7m, according to DP World. Re-exports account for nearly 70% of spare part imports.

“The aftermarket for automobile spare parts has been a highly attractive sector for UAE-based enterprises, who have emerged as the leading suppliers to many countries in East, Central and Southern Africa,” says the DP World spokesperson.

Jebel Ali’s value-added services include parts assembly, re-branding, re-packaging, stuffing and containers for re-exports to more than 150 countries by sea, air and road, as well as for local markets.

Digital operation
According to the spokesperson for DP World, Jebel Ali port makes use of technologies such as automation, Internet of Things and cloud computing to drive forward productivity. “Much of our strategic dialogue with customers is dominated by the potential of digital technology to revolutionise the world of automotive supply chain management. We understand this is a high priority for many in the automotive industry,” he says.

“DP World is also investing 250m dirhams ($68.1m) in multi-storey parking garages. These covered car parks will serve, most effectively, the electric vehicle market, as EVs will not be stored in open yards like gasoline-fuelled vehicles” – spokesperson, DP World

“Our advanced automation system enables the tracking of vehicles from the time they’re discharged from vessels right up to delivery to the consignee with state-of-the-art technology. We use traffic algorithms to plan cargo flows, reduce traffic and truck turnaround times,” says the spokesperson.

Furthermore, the company also plans to introduce autonomous trucks in Jebel Ali in 2020, which will “future-proof” its terminal operations with minimised overheads, according to the representative.

DP World has also partnered with in-house logistics provider, Smart Solution Logistics, which moves vehicles and containers to and from the quayside as well as loading and unloading vehicles in and out of containers each day. The port operator is working with third parties to offer more facilities and value-added services at Jebel Ali such as pre- delivery inspection for vehicles.

“DP World is also investing 250m dirhams ($68.1m) in multi-storey parking garages,” reveals the spokesperson. “These covered car parks will serve, most effectively, the electric vehicle market, as EVs will not be stored in open yards like gasoline-fuelled vehicles.”