Mercedes-Benz takes to rail to move cars to China 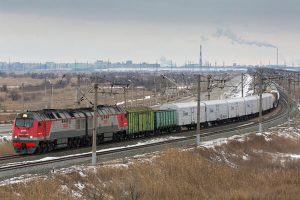 Russia’s railway monopoly RZD has delivered the first batch of finished Mercedes-Benz vehicles from Bremerhaven, in Germany, to Chongqing in China. The new route, which is informally referred to as the new Silk Road, has already proved a viable alternative to ocean shipping vehicles from Europe to China, which takes up to 60 days.

There were 112 cars in the inaugural shipment, which were loaded onto rail cars at Kaliningrad in collaboration with logistics provider Gefco.

Alexei Shilo, RZD commercial director, said the rail journey through Belarus, Russia and Kazakhstan took 15 days and that next year, Mercedes-Benz plans to contract RZD to deliver 20,000 vehicles on the route.

There is currently strong demand for European cars in China, so the rail service has good potential. According to Russian news outlet Gudok, German carmakers accounted for 21.6% of overall sales in the country’s market last year, compared to 42% for Chinese brands.

Shilo said there was increasing demand for rail services to transport vehicles across Russia. In addition to the Mercedes-Benz contract, subsidiary RZD Logistics recently delivered 123 Volvo XC60 finished vehicles in 40ft containers from Chengdu to Rosva railway terminal, in Kaluga.

Delivery of cars by rail from China to Russia is going to become more regular, added Shilo, with finished vehicle movements by rail in Russia expected to grow 10% in 2018.

China, meanwhile, subsidised logistics costs in the rail sector to the tune of $100m during 2017 and this year, this figure is expected to be even higher, according to Lyudmila Semyonova, deputy chairman of the logistics committee of the Russia Industrial and Commercial Chamber. Semyonova said state aid was improving the commercial attractiveness of rail as an option and that because of this, “many of the world’s leading logistics companies are considering projects in this area”.