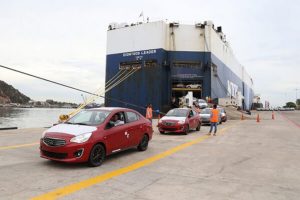 Mitsubishi has delivered its first shipment of Japanese-made vehicles to Mexico through the port of Mazatlán. It was the largest single delivery of vehicles by a carmaker to the port, consisting of 4,870 vehicles including Mirage hatchback, Mirage G4, Eclipse Cross, Outlander and L200 units. The vehicles were unloaded in a record 60 hours by 100 drivers under the supervision of Terminal Maritima Mazatlán (TMAZ).

The carmaker will start regular commercial operations in February this year, according to Jorge Vallejo, president and CEO of Mitsubishi Motors México. Vallejo was joined by secretary of state for the economy, Javier Lizárraga Mercado, to welcome the first shipment. The new Triton will also be imported over the coming months.

Following an agreement made in 2003, Mitsubishi vehicles delivered to Mexico have previously been distributed by Chrysler.

Mitsubishi chose Mazatlán because of available capacity and it will remain the carmaker’s exclusive port for imports. From there, the vehicles were taken by rail to Mitsubishi’s vehicle processing centre in Aguascalientes for value-added services before final delivery.