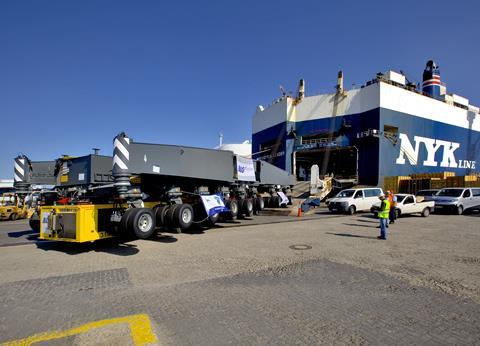 After months of planning, NYK Roro is now transporting one of its largest ever cargoes, a harbour crane, taking it from Bremerhaven (Germany) to Port Hueneme (California) for the Liebherr Group of Switzerland.

Several technical meetings took place in the Liebherr factory at Rostock to evaluate the right equipment to use and a logistic set up was developed to safely handle the cargo, the company said.

To overcome obstacles it confronted, NYK nominated the pure car and truck carrier (PCTC) Cassiopeia Leader, due to her ramp strength of 150 tonnes and 6.3-metre deck height, to transport the crane.

The majority was placed on roll trailers, except for its heart measuring 20 metres long by 6.15 metres wide. For that section, NYK called in heavy lift specialist Mammot Germany to help.

“After four months of dedicated hard work, involving the worldwide NYK network and local partners in Germany, such as BLG Logistics and Atlantik Hafenbetriebe Bremerhaven, this impressive harbour crane is finally on its way to the US west coast,” the shipping company added.