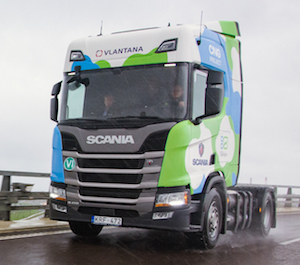 Truck and engine manufacturer Scania has started trialling the use of trucks fuelled by compressed natural gas (CNG) in Lithuania.

Potential advantages for Vlantana following the successful adoption of CNG-fuelled lorries, include being able to drive in restricted areas as well as opportunities to access ferries and underground parking garages, said executive manager Vladas Stončius.

A Scania R 410, powered by a 13-litre gas engine, is being tried out by Vlantana on its local and regional routes.

There are currently nine CNG filling stations in Lithuania, where the fuel is more than 40% cheaper than diesel.

Use of liquified natural gas (LNG) is also expected to grow in the country, with the first LNG filling station due to open next year.

The Lithuanian trials are the latest in a long list of initiatives that Scania, which claims to have the broadest use of alternative-fuel, offers among heavy commercial vehicle manufacturers.

The company makes engines with different tank combinations for CNG and LNG, while all of its Euro 5 and Euro 6 diesel engines can run on 100% hydrotreated vegetable oil (HVO), company spokesman Örjan Åslund told Automotive Logistics.

Some can run on fatty acid and rapeseed biodiesels, often referred to as FAME and RME. In addition, Scania offers bioethanol-fuelled trucks as well as hybrid and plug-in hybrid electric lorries, he said.

“Apart from that, we are also involved in numerous pilots and tests together with customers, academia and/or other stakeholders regarding battery electric vehicles (BEVs), hydrogen trucks, hybrids with overhead electricity connection, electric roads etc,” he added.

The company’s sales of alternative-fuel vehicles and engines is conducted on commercial grounds. Åslund commented: “Scania lives under the same conditions as all our competitors: although we have a broad offer, the vast majority of what our customers buy are still diesel trucks. But we can see that a shift is coming, and as a rule we always include an alternative solution in virtually all our tenders.”

The judges said they were impressed by how the company had integrated sustainability into its transport procurement process, calling it a very holistic approach which put sustainability at the core.

“Scania has clearly changed the culture of its organisation to deliver this consistent and measured benefit. Seriously impressive,” they added.

Howard Tenens, a 3PL provider in the UK, was highly commended by the judges in the same awards for its approach to sustainable logistics, including trialling two dedicated CNG 26-tonne rigids from Scania, the first 100% gas vehicles of their type on the UK’s roads.