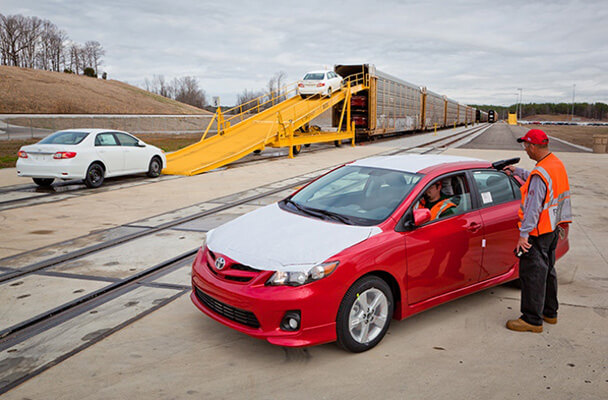 Japanese carmaker Toyota has chosen RJ Corman Switching Company as the automotive loading provider at four of its locations in the US.

Building on an existing contract which covers switching, preparing and loading railway wagons and providing track maintenance, Corman will now handle all new vehicles produced by Toyota in the US.

It will also provide and maintain locomotives, work trucks, fleet vehicles and additional pieces of speciality equipment between all four locations.

The new accord covers Toyota’s operations at Georgetown (Kentucky), Tupelo (Mississippi), Princeton (Indiana) and San Antonio (Texas) through to 2021. Corman said its workforce at Georgetown would expand by 40 employees, with 85 more at Princeton and 75 at San Antonio.

Chris Stevens, vice-president of operations for RJ Corman Switching Company, said: “This will expand on our rapport with the great team at Toyota and we look forward to a long and successful relationship.”

Corman has already worked with Toyota for seven years at Tupelo and six years at Georgetown. Since 2011, Corman has handled around 2m vehicles for the OEM.

“Corman has proven performance in the areas of quality and safety in our current operations,” commented D’Anne Duclos, vice-president of Toyota Logistic Services.