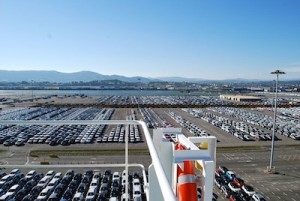 According to statistics released by the National Association of Automotive and Truck Manufacturers (ANFAC), Spanish vehicle exports were up in October, reaching more than 201,400 vehicles and equivalent to growth of almost 11%.

The picture overall – from January to October – shows that more than 1.7m units were exported, up 7.6%. Moreover, ANFAC sees further possibilities for growth, particularly to countries such as the US, Algeria, Turkey and Mexico, as well as in an expanded domestic market.

For the first nine months, ANFAC figures show that vehicles and components worth €29.3m ($36m) were exported, with finished vehicles alone accounting for revenue of €214m, up 13%.

The port of Santander saw its handling of finished vehicles for the first ten months of the year up almost 18% compared to the same period over the previous year, reaching just under 300,000. In October 2014 alone, Santander recorded the movement of 34,576 vehicles, up 1.6%.

As reported last month the Santander port authority is in the process of improving the ro-ro terminal there and a tender has been issued for resurfacing work. The work, which will take place over a three-month period, has an estimated cost of €1.05m ($1.3m). http://www.automotivelogisticsmagazine.com/news/santander-upgrades-to-cope-with-increased-vehicle-traffic

Meanwhile, at the port of Barcelona’s two car terminals more than 609,000 units were moved in first ten months, which is growth of 3% compared to the same period last year. Of this, exports accounted for 357,500 units, up almost 12%.

The port of Valencia has seen a marginal drop to the end of October of 0.08%. It handled almost 390,500 car units. The decrease was put down to a downturn in transhipped vehicles according to the port authority.

This puts the country on course to produce 2.6m units next year, rising to a projected 3m as of 2017.