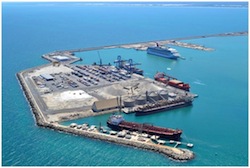 Given increasing capacity shortages for vehicles at the Mexican port of Veracruz, the government of the Yucatán region is trying to tempt vehicle manufacturers to make use of the port of Progreso to serve markets in the US, as well as Central and South America.

Gabriel Magaña Legorreta, managing director of Yucatán Trade & Investment Promotion, explained that the state government has been trying to identify those manufacturers with logistics interests in European and Central/South American markets for a number of years and persuade them to make use of the port of Progeso. Since it is the closest Mexican port to the US East Coast, Legorreta maintained it would make sense to ship both parts and finished vehicles from there.

“Logistics studies have indicated that, those companies using the port of Veracruz to ship vehicles, could, with just eight hours of additional transport, cross the states of Tabasco y Campeche, arrive at Yucatán and ship vehicles from the port the same day,” he said.

Despite the extra travelling time, this is offset by the fact that, at Veracruz, they would then be faced with a wait of 24-72 hours prior to being despatched. The cost of the protracted wait could work out more expensive than the additional haulage to Progreso, added Legorreta.

The port of Progreso is home to several multipurpose terminals and also handles containerised vehicle shipments through its container terminal. It is likely that the port will invest in dedicated vehicle terminal development subject to the level of interest shown by carmakers in an alternative to Veracruz.

Carmakers including VW and Ford Nissan use Veracruz for both import and export. Honda has also recently announced it will use the port for short sea shipments to the US East Coast. With OEMs planning to build a number of additional plants in Mexico by 2016, the port is facing congestion if investment in port expansion and rail capacity is not made soon.