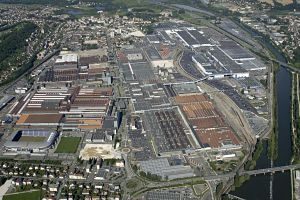 French carmaker PSA Group plans to modernise its Sochaux plant in the east of the country as part of a €200m ($213m) investment by 2022 that will include the installation of the first press line in France in two decades.

A dedicated team has been on site for three years to formulate the ‘Sochaux 2022 project’, aimed at turning the 100-plus year old production site and the group’s historical home into a “benchmark plant”. PSA owns the Peugeot, Citroën and DS brands.

“This strategic project aims to simplify flows, inherited from over 100 years of industrial history, that do not currently allow Sochaux to reach its full potential compared to the other PSA Group industrial sites,” stated the company.

Sochaux is a complex production site extending over 200 hectares, including 24km of conveyor belts and mobilising dozens of trucks to move vehicle sub-assemblies in production.

The new large transfer press line will be high-speed and will use cutting-edge technology, according to the company. It will be able to build multiple parts and produce both steel and aluminium components.

The modernisation project will also include the setting-up of a versatile, extremely flexible body-assembly workshop that will be situated closer to the other production buildings.

“Designed according to the principles of the plant of the future, Sochaux will take advantage of the latest developments in terms of digital tools, full kitting logistics, and mobile operator platforms for better ergonomics and optimum levels of quality,” said the company.

Once complete, the highly flexible line will be able to produce six different models with a production capacity of 400,000 cars a year. This compares to the 350,000 produced last year and the 385,000 units planned for 2017.

The plant is set to begin manufacturing vehicles for the Opel brand soon, as part of an alliance formed between PSA and the latter’s owner in 2012.

The companies also have production agreements at two other plants, with Opel to produce Peugeots at its Zaragoza plant this year and PSA producing Opels at the Vigo plant, also in Spain.

After forming an alliance with GM in 2012, PSA confirmed this week that it was in talks to potentially buy the latter’s European business, which is represented by the Opel brand headquartered in Germany and its Vauxhall brand in the UK.

PSA invested €1.5 billion in France between 2014 and 2016. Its five vehicle production plants and eleven component manufacturing plants there employ nearly 70% of the company's workforce worldwide. In 2016, it produced more than 1m vehicles and 80% of its engines and gearboxes in the country.