PSA invests in Morocco plant with a view to export 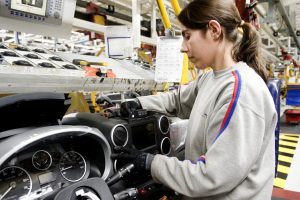 The agreement, signed by Carlos Tavares, chairman, managing board, PSA Peugeot-Citroën, and Moulay Hafid Elalamy, the Kingdom of Morocco’s minister for industry, trade, investment and the digital economy, is to build a plant in the commune of Ameur Seflia in the Kenitra province. The plant will produce B and C segment engines and vehicles from 2019. PSA said it will meet the needs of the region and of Moroccan customers.

After an initial production capacity of 90,000 engines and vehicles, the plant will raise output to 200,000 units in line with future demand. Tavares said, "Africa and the Middle East are among PSA's historic markets and we must make this region a key driver of international growth as part of our 'Back in the Race' plan. The agreement signed today with the Kingdom of Morocco will allow us to increase our production capacity in the heart of the region."

The competitive supplier base in Morocco will benefit from the gradual ramp-up of production, and the development of engineering operations. PSA plans to use 60% local suppliers from the launch date, and eventually raise this to 80%.

Although PSA has not revealed which models will be built at the new plant, Ian Fletcher, IHS Automotive principal analyst said, “It is likely that the timings would suggest it will build the next generation of its low cost C segment models, the Peugeot 301 and Citroen C-Elysee, as well as the Peugeot 208.

“The high levels of local content initially will be supported by the automaker already having links with the component supplier base in the country already. Indeed, these suppliers are already manufacturing parts for existing versions of these vehicles, which are then being shipped to current production locations.”

The proposed location will put the site in the Atlantic Free Zone, run by local development company Medz, according to Fletcher. “The site is said to be well connected for both road and train links, the latter offering the opportunity for moving completed vehicles to Casablanca port for export out of the country.”

This announcement will see the Africa-Middle East region becoming PSA’s third largest profitable growth market, and reducing its reliance on Western Europe. PSA plants to sell 1m units per annum in Africa and the Middle East by 2025, and according to Fletcher, the latest move does raise some questions as to whether there will be some impact on sites in Europe. PSA does have existing manufacturing facilities in Nigeria, and is currently in negotiations in Iran. The OEM has been shipping vehicles – mostly B and C segment, and compact LCVs – mainly from France and Spain.

Until 2010, PSA manufactured small volumes of Peugeot Partner and Citroën Berlingo at Société Marocaine de Construction Automobile, which it shared with Renault in Casablanca, Morocco, before Renault took over full control of the plant. The announcement therefore marks a return to vehicle production in Morocco by the OEM. PSA is keen to tap into the North African market, which is predicted to grow strongly over the next few years.