Redrawing the line side

Carmakers are looking carefully at ways to simplify inbound logistics to assembly lines, including kitting operations and, in some cases, insourcing. 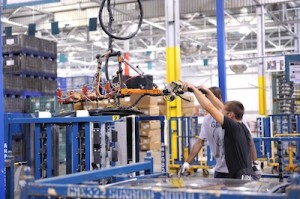 After a number of recent visits to automotive plants I have noticed changes to the ways that carmakers are thinking about final deliveries to the assembly line. Manufacturers as diverse as Nissan in the UK, Volvo Cars in northern Europe, Chrysler in North America and several OEMs in China, have all expressed plans to simplify aspects of their in-plant logistics and material flow.

The most notable changes seem to be a move away from sequencing directly to the line in favour of kitting, as well as a tendency to keep more of these operations in-house, rather than outsourcing them to tier suppliers or logistics providers.

In Sunderland last month at an event for the launch of the new Nissan Qashqai, several supply chain and purchasing executives told me that the carmaker was looking to increase kitting rather than direct sequencing at the line to avoid excess handling, transport and packaging costs. The already high volume of just-in-sequence line deliveries at Sunderland requires an extensive amount of material preparation, for which the carmaker uses three large warehouses (two adjacent to the plant, and one at the port of Tyne). With the huge number of variations for the new Qashqai, and even more for Infinity Q30 that will be built at the plant later this year, adding further sequencing would mean using up too much space line side and even higher costs in preparation.

Instead, Nissan will kit more material, simplifying line deliveries as well as the job of line operators, for whom the parts will have been sorted and verified. Effectively, the sequencing of parts is shifting from the line side into the kitting areas. “The purpose of doing this is to de-spec our inbound logistics,” Kevin Fitzpatrick, the Sunderland plant manager, told me.

This is a markedly similar approach to that of Chrysler since it started implementing the World Class Manufacturing (WCM) programme under Fiat management. Marcel Breault, head of WCM at Chrysler, recently told us that to simplify its line-side areas, Chrysler has installed off-line kitting zones where operators select, check and group parts prior to delivery. Chrysler has also elected to take these operations in-house to keep control and further reduce complexity, something Fiat itself has also done at a number of its major plants, including Betim in Brazil. [sam_ad id=6 codes='true']

A few weeks ago in Torslanda, at the Volvo plant in Sweden, I picked up on similar tropes. Michael Gustavsson, the deputy plant manager, told me how the carmaker is in the process of taking back in-house a number of on-site or nearby sequencing suppliers. Likewise, Volvo is upping its kitting activity as it upgrades its plant to build on new vehicle and engine platforms. As the plant builds seven models, each with a high amount of options and variations, kitting is again important to simplifying the delivery process.

Another of the plant changes, Gustavsson said, would include re-configuring deliveries as much as possible to arrive at gates adjacent to the material’s point of consumption on assembly lines, to which it could move directly upon unloading. There will be limits to this ambition in a 50-year-old plant with space constraints, but the implications for Volvo’s new factories in China are clear enough.

To outsource or insource, that is the question

Speaking of China, on a recent trip there I also picked up on manufacturers making similar changes. Qoros, one of the country’s newest ventures, has designed its factory around high kitting levels. Although Qoros – currently building one model with plans for a second – does not yet have the product variety of a plant like Sunderland or Torslanda, its ambition is to offer customers a wide range of options. Mike Dickinson, head of logistics, believes the kitting will help the plant be more flexible.

“The kitting makes manufacturing changes invisible to assembly line workers,” he said. “Most OEMs have a manifest on the hood of a car coming down the line with 35-40 parts on it. For Qoros, we have five.” 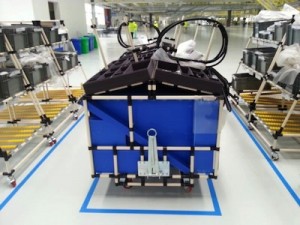 Interestingly, Qoros has also chosen to keep these kitting operations and in-plant logistics in house, despite the prevalence in many Chinese car plants to outsource it. During my trip there, I picked up on speculation that other carmakers, including some of the largest, were considering bringing this work back in house. Such a move isn’t simple in China, however. In the large joint ventures between foreign OEMs and locals, the Chinese partner’s in-house logistics arm is often the outsourced operator, and so changing the in-plant structure could be politically sensitive.

There are many more examples of line-side delivery changes to increase flexibility or free up space in plants or warehouses. For some, this has gone hand-in-hand with insourcing. In the US, General Motors has a fully owned subsidiary that has taken over the labour for kitting and sequencing in at least one plant: the Lake Orion, Michigan factory that builds the Chevy Sonic using very high kitting levels. Last year, an Opel/Vauxhall official also told me that the carmaker’s manufacturing executives were increasingly tending to keep such activities in house.

Outsourcing decisions always depends on many factors, including labour agreements, local wages and a specific’s plant product complexity. I appreciate that a few journalistic observations might amount more to anecdotal evidence than they do a global trend. Indeed, logistics providers continue to win in-plant business, including Ryder, Penske and Hansmann.

Ultimately, however, I think that simplifying line-side delivery processes, particularly for factories with high product and option variations, is something many supply chain and part engineers are thinking more carefully about. Some clearly believe that keeping such operations in a manufacturer’s hands is also the simplest way. It’s a debate that Automotive Logistics will be paying more attention to.

Note: The Automotive Logistics China conference this April in Beijing will feature a special session on in-plant logistics and outsourcing. Find out venue and programme details here.