Renault Nissan will increase its parts and powertrain localisation in Russia with a joint engine and chassis plant in Togliatti with Avtovaz. The plant, which begins operations in 2015, will help the Alliance meet local sourcing and production targets set by the Russian government that will allow the carmaker to maintain preferred import duty rates. It will also reduce logistics costs and lead times. 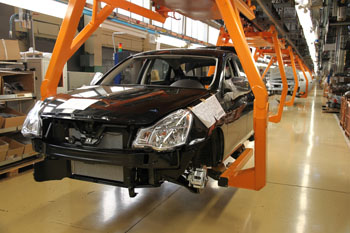 According to Renault and Avtovaz representatives, the preparatory stage for the production of 16-valve engines is nearly complete. The Russian carmaker has said it would invest 32 billion roubles ($1.07 billion) in the project by 2020. Besides engines, the new plant will be also producing chassis components, power units and other components. It will supply the BO production line at Togliatti, in the Samara region, where the Alliance builds Renault, Nissan and Lada vehicles.

“The new plant will be producing the engines in the amount of 450,000-500,000 units per year,” a spokesperson from Avtovaz told Automotive Logistics. “It will be engines of 1.6 litres for the cars Lada Largus and Nissan Almera, as well as some models of Renault, such as the Renault Logan, Sandero and Megane.”

“For some models the new plant will allow us to abandon import supplies,” the spokesperson added.

Renault Nissan currently imports chassis and engines to Russia from Romania and Spain. The carmaker is able to import such components with a customs duty of 0% as per the ‘166’ regulations that it and other manufacturers signed with Russia. To maintain this benefit, the carmakers must assembly 350,000 vehicles per year in Russia by 2020, including 60% local components and 30% local content for powertrain.

According to the company, the new plant is part of initiatives that will increase total localisation from 62% to 72% for the Alliance. As well as contributing to meeting the targets, a spokesperson for Renault said that the project would significantly improve logistics cost, and cut lead times for engines and chassis from five days to one or one-and-a-half days to the Togliatti plant.

Renault Nissan has further increased its localisation efforts in Russia with the formation last month of a joint purchasing organisation with Avtovaz, which will set procurement, quality and delivery standards for common parts across shared platforms.