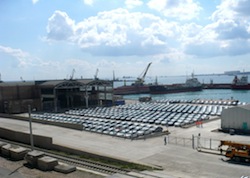 The Russian port Novorossiysk, currently one the country's most important ports on the Black Sea, has inaugurated a new ro-ro terminal dedicated to the handling of finished vehicles.

Called South Gate Novo, the terminal is a joint venture between the Delo Group of Companies and Rolf SCS, the finished vehicle joint venture between Rolf Group and NYK. The terminal has the capacity to handle 50,000 cars a year and is Rolf SCS’ third car transhipment facility in Russia. The company said that the terminal would provide the chance to shorten shipment distances to Russia. Novorossisysk is three days sailing from the port of Derince in Turkey and provides quicker access to dealers in the south of the Russia, the North Caucasus and Ural federal districts.

“With the help of the Novorossiysk terminal we will shorten the time of vehicle delivery to Russia and, by opening [the] strategically important South Gate Novo, we will be able to build an integral logistics network that covers the whole territory of our country and opens all doors and roads to our customers,” said Alexander Larin, director general of Rolf SCS.

The ro-ro terminal has been built by the Deloports stevedoring division using land freed up following the expansion of its grain terminal at the port. The necessary conversion work took place in August and resulted in the creation of a berth dedicated entirely to the reception of imported finished vehicles, as well as a storage yard capable of accommodating 1,565 cars.

"For Deloports, the launch of the terminal is an opportunity to gain more revenue from yard space not needed in the handling of grain,” said Deloports' managing director, Timothy Telyatnik. “We are pleased with the effective cooperation from our partners, Rolf SCS, and note the rapid implementation of the project.”

The first trial shipment, of around 400 vehicles, arrived in August, while the terminal itself was officially inaugurated on September 9 when the first scheduled consignment was delivered by UECC’s M/V Autopremier vessel. The vessel off-loaded 756 Toyota vehicles, mainly Corolla Sedan and Verso models, that it had taken on board at the Turkish port of Derince. One major delivery is now scheduled per week at the Novorossiysk terminal using the Autopremier.

Last month UECC announced it was launching a regular ro-ro liner service between major ports in Turkey and Russia starting in September.

As revealed at this year’s Automotive Logistics Russia conference held in Moscow in June carmakers, including Toyota and Volkswagen, are looking for further development to support vehicle shipments through ports on the Black Sea, with Novorossiysk one of the leading port locations.