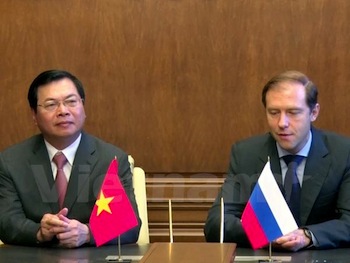 Russia’s industry and trade minister Denis Manturov (right) and his counterpart in Vietnam, Vu Huy Hoang, have signed an agreement for the establishment of several assembly lines in Vietnam that will make Russian cars from imported vehicle kits and spare parts.

The agreement also involves duty-free supply of cars under this year’s quota, as well as automotive kits from 2017.

The Russian government estimates the agreement could save Russian carmakers up to RUB 3.5 billion ($52m) of logistics costs over the next three years.

It is not yet clear, however, which carmakers will get a quota on duty-free export. The government has named Avtovaz, Renault, Gaz and Kamaz, along with the joint venture projects currently run by Sollers with Mazda and Ford – but the quotas appear to be too low to include all of them.

“According to the agreement, Russia has the right to supply 2,550 units within the coming three years without paying any duty,” said Manturov. “[It can also supply] 13,500 automotive kits within the coming five years, with the creation of assembly lines with a localisation level of between 40-50% by 2025.”

Manturov added that Russian carmakers would be able to make duty-free exports of up to 800 vehicles to Vietnam this year and start knockdown kit exports in 2017.

The Ministry of Industry and Trade said that Gaz, Kamaz and Sollers had already confirmed their participation in the agreement, with some details still under negotiation. According to a spokesperson for the ministry, the creation of facilities assembling vehicles from Russian automotive kits and components could also provide access to other markets in the ASEAN region.

Gaz confirmed it was considering the launch of a joint venture with local company Vinamotor, while Kamaz already has an assembly line in Vietnam that is owned by national company Vinacomin. Autovaz, meanwhile, has so far refrained from comment.

Representatives of other Russian carmakers who preferred to remain anonymous, however, suggested that in general, the Russian automotive industry was disappointed with the agreement.

One source said Vietnam was more interested in attracting Japanese manufacturers when it came to passenger vehicles, while the current version of the agreement for Russia only provided low level of quotas – “much lower than had been discussed initially”. According to this source, the agreement is not as beneficial for Russian assembly lines as was previously thought.

That has not stopped Avtovaz’s partner Renault from beginning vehicle exports. In late March, it sent small shipment of 48 cars to Vietnam. Russian automotive logistics company Module handled the delivery after winning the tender from Renault in 2015, and opted to deliver the cars by sea from the port of St. Petersburg in 24 containers.

General manager of Renault Russia, Daniel Levot, has confirmed that Renault is looking to expand exports outside of the CIS countries over the next couple of years and Vietnam is one of the most promising possibilities, along with Algeria and the European Union.