Russia conference: Quality is more important than ever for Toyota 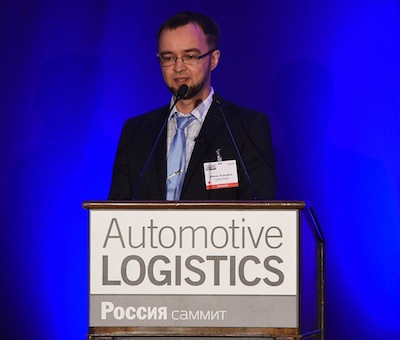 The decline in Russian vehicles sales means a fewer of them are being moved around. That means there is now time to focus on installing better quality processes in transport services, according to Alexey Kokotkin, manager logistics, vehicles, Toyota Motor Russia (pictured), who was speaking at last week’s Automotive Logistics Russia conference. Kokotkin took delegates through the methods Toyota is applying in Russia to improve quality and stressed the importance of driver training as much as the assessment techniques used in proactively bringing down damage rates. “It’s a good time to revise our approach and focus on quality, which is one of the main priorities of our company,” he said. “What can be improved, and what can be used to improve it?”

Overall, the damage rate for Toyota vehicles on auto carriers in Russia stands at 0.31%, and damage while finished vehicles are in storage at 0.06%. Compared to last year, Toyota Russia has seen a 37% damage improvement, but there have been instances of serious damage in 2016 – 28 cases for the first four months of the year – and Kokotkin said that needed to be addressed.

Raising the quality level in the transport of its vehicles is important ahead of Toyota’s launch of the second vehicle to be assembled at its St Petersburg plant – the Rav 4. As the Rav 4 is a larger vehicle, transporting it on a vehicle carrier leads to a tight loading factor noted Kokotkin. “We can fit seven vehicles on a carrier, but in order to do this at a high quality level, we have to pay more attention to standardisation,” he said.

So in 2016, Toyota Russia is paying more attention to quality and safety and is doing this in a number of ways. One is by applying PTC, or ‘plan, do, check’, principles to identify the core reasons for damage. “After we define the reason for damage, we have to take countermeasures and check the result. If the practice is successful, it has to be part of the standard and used: we carry out the whole cycle from the beginning,” Kokotkin said.

Toyota also looks at any instance of damage to its vehicles from a variety of perspectives to identify what were the main factors. Citing one example relating to gravel damage during transport on a road transport unit the company then looked at preventative measures such as installing mechanical protection on the vehicle carrier, or protective sheets on the undercarriage. It also looked at how the driver could take measures to decrease the speed of the carrier.

In another example it was found that oil was spilling out of a tube on the transporter during the loading and unloading of the vehicles from it because the tube was of a low quality material, cheaper for the equipment maker to source. Saving money was a priority for the transport company but switching to a better quality material would resolve the issue and even save money down the line. “You have to take it down to the lowest level,” said Kokotkin.

Formal approach to driver safetyKokotkin said that driving safety was paramount for auto carriers, and adopting a formal approach to it was essential. “You have to obey traffic rules but that is not enough,” he noted. “You have to know that human vision has a certain limitation. At night for example, there is the risk of hitting a motorbike or driver or cyclist. There are around 300 potential dangerous situations.”

Drivers are taught to address issues that they see, and Toyota Russia recommends that they stop regularly every 200km to check the vehicles, harnesses and other bits of equipment. “To manage the human factor, we continue training drivers. It’s more efficient when we get drivers in the classroom,” Kokotkin said.

As OEMs in Russia plan to increase their localisation, Kokotkin said he hoped existing and future partners would be prepared to meet Toyota’s quality standards and that the transport process could be standardised. “Quality calls for thorough analysis,” he said. “And we have to remember that the safety of people comes first.”