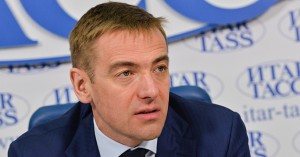 Russia is preparing to renegotiate some of the commitments it made when it joined the World Trade Organization (WTO), including those governing the duties applied to vehicles imported to the country. According to deputy minister of industry, Viktor Evtukhov (left), Russia aims to preserve or even increase the import duties, which previously it had promised to reduce.

Negotiations are expected to focus on duties applied to products from the automotive, engineering and metals industries, according to the Ministry of Industry, though there is currently no published list of the products on which the revised duties will be applied.

“The Ministry of Industry will analyse the requests of the companies and industry unions on this issue,” said Evtukhov.

The decision has support from political leaders, and last week the country’s minister of industry and trade, Denis Manturov, is reported to have discussed the issue with president Vladimir Putin.

Immediately after Russia's accession to the WTO, import duties for new cars were decreased from 30% to 25%. The original agreement called for further decreases until import duties reached 15% in 2018. When Russia joined the WTO in 2012, it also committed to a recycling tax designed to remove older, more polluting vehicles from the road. According to some commentators those recycling fees were specifically designed to replace import duties and protect the domestic market (read more here).

The next decrease is scheduled for January 1, 2015.

For certain types of vehicles the reduction in duties was scheduled to be even greater. For cars with engine capacity exceeding 2.8-litres, the duty was planned to drop to 12.5%, while SUVs with 3.5-4.2-litre engines were to incur no more than a 10% duty.

Now, however, the Russian government is reported to be curtailing the extent of its plans following advice that any further decrease in duties could close local assembly as carmakers switch to more imports.

One source at the Ministry of Industry and Trade, who wished to remain anonymous, said there was a high probability that the government would raise the issue and that, in the current situation, it would not be hard to prove the drop in duties could hurt the Russian car industry.

"The reduction of import duties on cars in the current environment will exacerbate the crisis in the industry and could make a number of producers, which have opened assembly plants in the country, reconsider their investment plans in Russia," said the source.

He added that the Russian government has now committed itself to supporting the automobile market through various measures, and that it was clear that the further reduction of duties would be counterproductive.

Roland Berger Strategy Consultants has suggested that customs duties on cars will in fact be raised to the level they were before the country joined the WTO, which were between 30-35%. Edward Cherkin, member of the board at the Russian office of the consultancy, estimated that this measure could increase the revenue of the country’s budget by €55m ($70m) per year and said that this money may go to further support localised automotive producers.

Earlier this year, a report by Roland Berger suggested that declines in the Russian market where liable to lead some OEMs to close smaller factories in Russia, potentially leading to a higher share of imports relative to locally produced vehicles. However, the reported efforts to reverse lower duties demonstrates the extent to which the Russian government is willing to protect local vehicle assembly.

It is not yet clear what impact Russia’s reversal of its commitment to the WTO would have on its membership in the organisation.

Russian light vehicle sales have fallen 12% in the first eight months of this year compared to 2013, including sharp declines since the fallout of the crisis in the Ukraine.